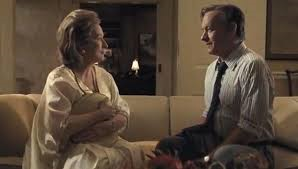 When Steven Spielberg decided to direct his latest film based on a screenplay by Liz Hannah in double-fast time, one could surely predict the preponderance of latter-day allusions which would be built into this movie’s fabric despite its early 1970s setting.  Here is the central theme and debate concerning the freedom and attendant latitude of the press.  Elsewhere, there is the story of a strong-willed woman who is taken for granted within the very institution over which she presides.  Do these very two matters have a very real relevance in a present-day context?  With the current occupant of the White House actively engaging on Twitter every day and dismissing many of the reports regarding his administration with some abandon, the subject matter of The Post could hardly seem more timely.  The film’s director evidently felt as much.  Spielberg worked on principal photography for The Post whilst post-production was on-going on his forthcoming science fiction film Ready Player One.  He adapted a similar strategy as far back as 1993 with Jurassic Park and Schindler’s List – two films which were poles apart just as these latter two – one suspects – will prove to be. 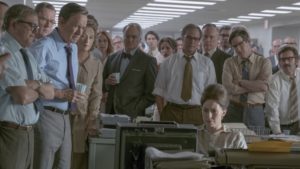 As back-story, the film begins in Vietnam in 1966.  A military analyst by the name of Daniel Ellsberg (Matthew Rhys) is none too surprised to hear the then Secretary of Defence Robert McNamara (Bruce Greenwood) surmise that the military effort in south-east Asia is proving to be a disaster of epic proportions.  More and more troops are being committed to the theatre of conflict, but progress remains completely stagnant.  The real shock for Ellsberg transpires however when he listens to the Secretary strike an unmistakable note of optimism to the press when they return stateside.  Years later – 1971 to be precise – the disillusioned Ellsberg determines to take matters into his own hands and leaks reports concerning the war to the New York Times.  The Times runs with the story and its initial report essays a major deception of the American people which has been on-going for some three decades.  But then the legal machine of the current administration swings into action and slaps the paper with a court injunction.  To the agents of the free press in both the Times and the Post, this smacks of an overt violation of the First Amendment.  The freedom of the press has never been taken to task in this manner before one of the characters remarks.  The founding fathers surely would have balked at such a thing.  A subsequent Supreme Court ruling – delivered at the film’s denouement – correctly reasons that ‘The press was to serve the governed, not the governors.’ 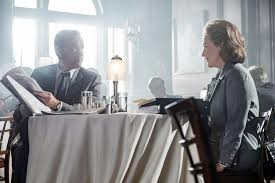 The conclusion of The Post is never in doubt, but Spielberg succeeds in making the tension palpable and the repercussions which may follow all too real as he drives the narrative forward with his talented cast and crew.  Tom Hanks is perfectly steadfast and stubborn as Ben Bradlee, the editor-in-chief of the Washington Post who fervently believes that the press has a right and concomitant obligation to question the decision-making processes of the powers-that-be.  As the first female publisher of a major American newspaper, Meryl Streep is a perfect fit as Katharine Graham.  Upon her shoulders rested the ultimate decision and responsibility to publish the Pentagon papers despite the sizable threat it presented to her newspaper and, in fact, her very livelihood.  In supporting roles, Bob Odenkirk and Sarah Paulson also excel respectively as Ben Bagdikian and ‘Tony’ Bradlee.  In the background Tracy Letts and Michael Stuhlbarg look as if they belong to this era.  The production design of The Post and cinematography of Spielberg regular Janusz Kaminski are impeccably executed as are the dramatic swells of John Williams’s score.  Alas, there are some sentimental flourishes which Spielberg can never resist, but for the most part The Post works exceedingly well thanks to its remarkable cast and crew.  A direct nod to the ensuing events of the Watergate scandal (and Alan J. Pakula’s All The Presidents Men) will bring a wry smile to those of us who are familiar with the iconic phrase ‘Follow The Money.’  There may be no Deep Throat here, or shady meetings in parking lots, but the bravery of these people is more than evinced in this highly effective political drama.  Linear yes, but executed with a touch of class by its seasoned contributors.