Movie Review: The Shape of Water 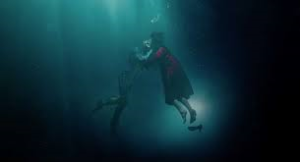 The latest fantasy offering from Guillermo del Toro is a continuation of the director’s fascination with monsters, fables and humans of distinctly imperfect dimensions.  It’s also quite possibly the director’s most beautiful and fully realised vision to date suffused as it is with his dominant amber lighting and trademark special effects.  Set in 1962 during the height of the Cold War, and gathering furore of the Space Race, The Shape of Water tells the story of one Elisa Esposito (Sally Hawkins), a mute cleaner who works at a secret government laboratory in Baltimore.  Described in an opening scene voiceover as a ‘princess without a voice’, Elisa has a robustness and steely determination about her which belies her fragile appearance.  She lives above a movie theatre and watches old Hollywood musicals with her gay neighbour Giles (a superb Richard Jenkins).  Although she is unable to communicate in the conventional sense, Elisa has an effortless aura about her which informs us of her perpetual sense of self.  She has an inner contentment which translates into her actions and interactions with the world.  In keeping with such a character trait, Elisa is unfazed when a mysterious creature is delivered to the facility in a forbidding-looking water tank.  Referred to by the powers-that-be as the asset, the Amphibian man might be a mutant or a God of sorts.  There are those who wish to dissect him in the name of national security – Richard Strickland (Michael Shannon); there are also those who, quite rightly, believe that he should be studied in the interest of science and progress – Robert Hoffstetler (Michael Stuhlbarg).  The conflict between the cautious military man and his idealistic counterpart is, of course, nothing terribly original, but at least del Toro infuses it with an interesting element by revealing Hoffstetler to be a Russian spy.  Just like Strickland, he has his superiors and orders as well – destroy the creature if needs be in order to prevent the enemy from learning anything from studying him. 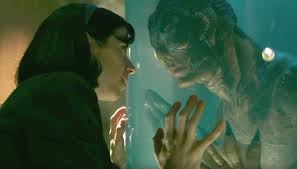 A tentative relationship begins between Elisa and the creature as she brings him hard-boiled eggs and plays him her favourite records.  The fact that she manages this subterfuge at all – with hardly anyone suspecting as much – is one of the less credible plot points of the film, but much more endearing and tangible is the warm rapport that soon develops between the two; in time we will realise that this is in fact a courtship.  Hawkins is quite remarkable in this segment of the film and she’s ably supported by Octavia Spencer who plays her co-worker and one of her central mediums with the world.  A sub-plot involving Jenkins’s unrequited desire for a cafe waiter has much to say on the subject of intolerance and racial discrimination.  Michael Shannon’s Strickland is also a persona in such a vein – an essentially sadistic control freak who is strangely attracted to Elisa’s wordless disposition.  A fine actor in his own right (as he proved once again in 2016’s Nocturnal Animals), Shannon is deserving of better roles than this one-dimensional thug who is much too reminiscent of his Nelson Van Alden from HBO’s Boardwalk Empire.  It’s one of the very few missteps which The Shape of Water makes during its two-hour duration.  Elsewhere, the ever-excellent Michael Stuhlbarg fares better as the Soviet spy with pangs of conscience concerning his mission. 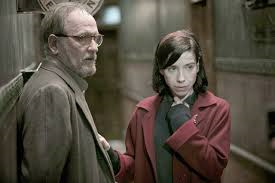 A monster movie aficionado, del Toro (who also originated the story and co-wrote the script) references many famous cinematic creations from Frankenstein’s monster to the Creature from the Black Lagoon.  There are elements of E.T. and Beauty and the Beast as well as knowing nods to science fiction films of the 1950s and early 1960s.  The fact that he sets his film some 50 years in the past tells us much about del Toro’s overarching design.  A contemporary story might have occasioned too many allegories and intertextual readings.  By positioning his narrative in an age when mistrust and suspicion were rife, the director succeeds with his basic story of human need and desire.  The main protagonists are flawed entities who seek to better themselves and their immediate environs.  A prevalent sense that they are out of kilter with their times is articulated in a scene in which Jenkins bemoans to the creature the fact that he was either ‘born too early or too late.’  The creature (played by del Toro regular Doug Jones) is a physical manifestation of such contrast and incongruity.  Unable to speak like Elisa, he is regarded by some as a freak of nature, devoid of intelligence and emotion.  David Lynch’s The Elephant Man springs to mind here in this regard.  Because of his physical anomalies, the creature is viewed as little more than a mindless animal which can be tortured and experimented on in the interest of safety and stability. 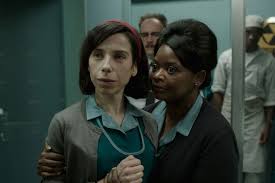 Del Toro’s assured direction and commitment to this particular genre are two of the film’s strongest suits, but the director also owes much to his talented cast and crew.  In the central role of Elisa, Sally Hawkins has never been better projecting, as she does, aspects of strength, empathy and poignancy.  In supporting roles, Richard Jenkins and Octavia Spencer are well deserving of their supporting acting nominations and Doug Jones elicits appropriate levels of sympathy as the tender creature.  Visually, The Shape of Water is as beautiful as one would expect (kudos to Danish cinematographer Dan Laustsen in this regard) and the overall set direction and production design is second to none.  A typically sumptuous score by French composer Alexandre Desplat perfectly complements del Toro’s musings on the general power of cinema and also fits well with the love story arc.  Viewers will be struck by the prevailing use of the colour green in this picture which extends all the way to a joke concerning the Cadillac which Shannon’s character purchases approximately half-ways through the story.  A visual treat for the senses which is backed up with an absorbing treatise on the all-embracing power of love.  Del Toro the filmmaker and storyteller at the very height of his powers.