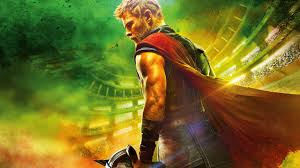 ‘I know what you’re thinking: how did this happen?  Well, it’s a long story…’ begins Chris Hemsworth’s Thor in the opening scene of director Taika Waititi’s entry in the Marvel Cinematic Universe.  The crown prince of Asgard has become something of a lone gunslinger in his quest to find the precious Infinity Stones (which, if you will recall, have been referenced in previous Marvel films).  But his search has brought apparent subjugation and imprisonment at the hands of a fiery demon named Surtur.  One effects-laden fight sequence later, however, and Thor is once again triumphant, believing he has saved Asgard from a prophesied apocalypse called Ragnarok.  Done deal some of us might think who are growing somewhat weary of the Marvel Cinematic Universe generally (this is, after all, motion picture number seventeen in total).  Doesn’t the plot seem blatantly familiar?  Haven’t we seen all this CGI paraphernalia on countless occasions previously? 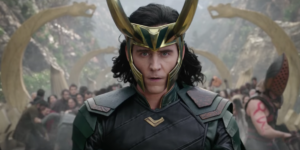 The answer to those questions is yes, of course we have, but Thor: Ragnarok revels in such a familiar vein and is entirely at ease in the universe it is situated.  This is a big brash movie which is not insecure with respect to its pseudo-mythological origins and is certainly not retiring with regard to its delivery of colourful (often bordering on kitschy) cosmic adventure.  Having prevented the onset of Ragnarok, as he believes, Thor returns to Asgard where his treacherous adoptive brother Loki (Tom Hiddleston) is posing as their father Odin.  The concluding scenes of 2013’s rather indifferent Thor: The Dark World had informed us that the dark-haired one was very much alive in spite of his evident demise.  This is a saving grace for the series generally because Hemsworth and Hiddleston are a wonderful pairing who barb off each other to fine effect.

The same can equally be said of Mark Ruffalo’s Hulk/Bruce Banner who appears when Thor is marooned on the planet Sakaar following the introduction of his long-lost sister Hela (Cate Blanchett), herself more that intent on making up for lost time and intergalactic mischief.  Yes, I could expand a little on the plot of Thor: Ragnarok at this point, but suffice it to say that the reunited siblings do not get along and there is no place for Thor in the new and despotic order that is Asgard.  It’s a welcome sight to see the Hulk appear as Sakaar’s much-heralded champion whom Thor much battle in order to win his freedom.  Ditto such a sentiment also with regard to Jeff Goldblum’s Grandmaster who is a hedonist supreme and enjoys his position as a master manipulator.  Goldblum, an actor who is well served by improvisation, is given free rein here by Waititi and steals every scene he is in.  One hopes he will turn up in future MCU incarnations.  The same can be said of Tessa Thompson’s Valkyrie who more than holds her own in these proceedings. 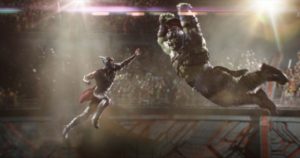 The contest sequence between Thor and the Hulk is literally a smash-fest and is at its best during its comic moments.  ‘Yes!’ a visibly overjoyed Thor cries out to the befuddlement of those in attendance with the one exception of Loki (who has also crash-landed on the planet).  ‘We know each other.  He’s a friend from work.’  The ensuing sequence is unremarkable in this reviewer’s estimation and suggests that CGI has little further to add with respect to such confrontations and general battle scenes.  Thor: Ragnarok works best when its characters are playfully berating each another and when the special effects take precedence over such exchanges (as they do in the third act), one longs for a return to the insouciant quality of Hemsworth and his fellow actors.  The Australian actor had previously voiced a slight weariness with the character and kudos to director Waititi for allowing him sufficient latitude to explore other dimensions.  Mark Ruffalo – an actor of the very highest caliber – is similarly pitch perfect as Bruce Banner when that particular character is…well…not the Hulk.  Returning cast members Idris Elba and Anthony Hopkins are not greatly stretched in their respective roles.  Cate Blanchett’s Hela meantime is a worthy foe complete with a headdress which renders her all the more formidable.  The one curiosity in all of this is the appearance of Karl Urban as the conflicted Asgardian warrior Skurge.  Urban is a fine actor in his own right, but I wasn’t quite sure what to make of his performance.  Cameo appearances – which abound throughout – include those of Matt Damon, Sam Neill, Benedict Cumberbatch and the ever-durable Stan Lee. 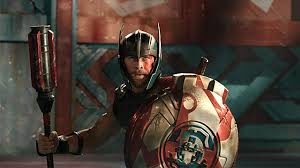 Thor: Ragnarok’s final act does become a little silly and weighted down by the demands and expectations of the Marvel Comics Universe as I’ve suggested earlier; however, for sheer escapist entertainment, it’s an absolute hoot which benefits, in particular, from the performances of Hemsworth, Hiddleston, Ruffalo and Goldblum.  There’s little new ground broken here, but director Waititi and his scriptwriters Eric Pearson, Craig Kyle and Christopher Yost have very sensibly chosen to revel in the exaggerated environs their film is set in.  The cinematography of Javier Aguirresarobe (who has shot films as diverse as The Road and 2011’s Fright Night) and music of Mark Mothersbaugh give heightened effect to this, as do such timely interventions as Led Zeppelin’s Immigrant Song and Pure Imagination from Willy Wonka and the Chocolate Factory (who could possibly have seen that one coming?).  Remarking upon the rather gaudy colours which are so prominent on the planet Sakaar, Thor suggests that the designers should have simply chosen one – red or white.  Fortunately for him, and this movie, Waititi and his team have, by and large, made all the right choices.  A welcome return to form for the Asgardian God of Thunder.  And his new haircut isn’t half bad either.