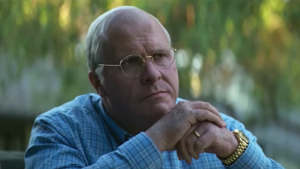 Four years ago writer-director Adam McKay gave us The Big Short, his wry and often scathing indictment concerning the financial crisis which followed in the wake of the U.S. housing bubble.  Acknowledging the fact that monetary concepts such as subprime mortgages were difficult for the average Joe to process, the director engaged in some unconventional narrative techniques.  Direct pieces to camera and the breaking of the fourth wall were the order of the day; an overarching narrator sought to break down knotty practices within this world and make them more universally understandable.  The devices employed worked for the most part.  An otherwise impenetrable subject matter was rendered relatively intelligible, even entertaining.  At the outset of his new film – a biopic on Dick Cheney, the 46th vice president of the United States – McKay acknowledges that the subject matter he has chosen to take on in this particular instance is complex due to the inherent privacy of the individuals concerned.  There will be speculation and conjecture to follow is the message the filmmaker imparts to us from the get-go.  Not everything will be necessary true, but the suppositions we will be presented with will raise more than a few eyebrows. 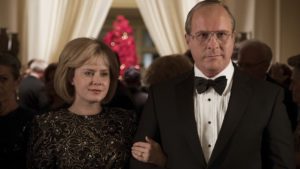 For a film which runs just over two hours in length, there is quite an expanse of territory to cover.  Beginning in 1963, Vice presents us with a somewhat reckless figure who has more than a passing penchant for the hard stuff.  Working as a lineman in Wyoming, Dick falls foul of the law following a drink-driving incident.  His soon-to-be spouse Lynne (Amy Adams) delivers an ultimatum regarding their future together which is decidedly unambiguous – give up this impulsive lifestyle of yours or else we’re done here.  Dick duly pays heed.  When we next see him, he is plying his trade as a White House intern in the Nixon administration.  The middle-ranking position brings him into contact with one Donald Rumsfeld (Steve Carell) and, more importantly, assists his evolution as an astute political operative.  Good times and bad times ensue for both men during Gerald Ford’s short tenure in the Oval Office and the Reagan administration in the 1980s.  Of more personal bearing for Dick and Lynne are his frequent bouts of ill-health and the coming-out of his younger daughter Mary (Alison Pill). 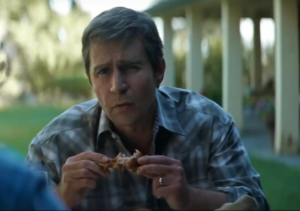 As with The Big Short, McKay moves along the proceedings with a suitably deft touch and the aforementioned narrative innovations which are, for the most part, smart and snappy.  He overplays his hand somewhat with a false epilogue mid-way through which is followed by a fake credits roll.  The ruse is obvious, but it feels unnecessary, even slightly heavy-handed.  We get the idea that this is a satire in part as much as it is a denunciation on historical events which came to pass such as the War on Terror.  The meat on the bone of the piece is eventually broached of course when Republican presidential hopeful George W. Bush (Sam Rockwell) invites Cheney to become his running mate in the 2000 election.  Cheney – who has long since abandoned his own hopes of running for the highest office – discerns an opportunity of some merit from his own perspective.  Determining to become the most powerful vice president in U.S. history, the incumbent CEO of Halliburton duly explores and pursues the Unitary executive theory.  More immediately felt from the audience’s point-of-view are the subsequent invasions of Afghanistan and Iraq and the resulting loss of civilian life and mistreatment of prisoners.  McKay pulls no punches here with many of the images he presents.  The scale of human suffering which emanates from erroneous and self-serving decision-making is not to be taken lightly he tells us.  As if hearing this very criticism, a final piece to camera by the central character himself informs us that he is a man with no regrets.  I did what needed to be done he tells us in a matter-of-factly way.  Much of it was not pretty.  The man who once wielded such unprecedented power for his position was not concerned with the aesthetics of his actions, rather with the practicalities of his measures.  This was the measure of his will and – rightly or wrongly – has cemented his place in history. 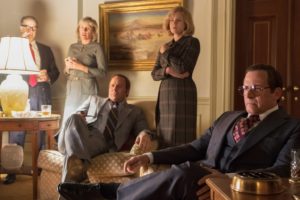 Vice is a tougher sell than The Big Short and this may, in part, explain some of the lukewarm reviews the film has received to date in spite of the many nominations it has garnered from the likes of the BAFTAs and Academy Awards.  The chief difficulty here surely lies with the central character of the piece – Dick Cheney remains a problematic enigma to the end; neither outright villain (witness for example his acceptance of his daughter’s sexual inclination) nor intrepid hero, he is the very personification of a conundrum.  The motivation which drives his character is never quite unearthed by McKay’s script in spite of the technical flourishes and narrative asides.  There is a real sense here that this is indeed a man who cannot be truly fathomed and it makes for an uneasy feeling at the film’s end.  Christian Bale’s performance – remarkable as it is – serves to emphasise the character’s bland magnificence and he is well supported by Adams and Rockwell in particular.  McKay regular Steve Carell also excels as Donald Rumsfeld.  Naomi Watts turns up from time to time as an unidentified news anchor.  Vice could never be described as a heart-warming affair and it is quite the polar opposite to a Mr. Smith Goes to Washington.  Unlike the callow young senator of the Frank Capra classic, Dick Cheney is presented as an incredibly shrewd and unrelenting individual who knew just what he wanted to achieve on the corridors of power.  It seems unlikely that history will be kind to him given the legacy which still lingers to this very day, but – as with The Big Short – McKay has once again delivered a sharp-edged piece which will divide some audiences and cause them to ponder some of the issues raised.  That’s not a bad form of movie-making in today’s world as far as I’m concerned.