Movie Review: War for the Planet of the Apes 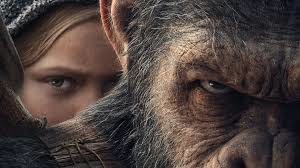 The final chapter of the Planet of the Apes rebooted trilogy draws together all of the elements that have worked so well for these recent films in the franchise and succeeds in being the best of the three; that’s certainly saying something given that this reviewer rated both 2011’s Rise and 2014’s Dawn very highly indeed.  In a recent article which I posted on the Planet films generally – which began almost 50 years ago with the 1968 original – I spoke of how both Rise and especially Dawn pointed the way as to how Hollywood should approach its sequels and reboots.  Yes, there are visual effects galore in these films, but, importantly, there is also a marked emphasis on narrative arcs and strong storytelling which set these apes films apart from the rest of the crowd; and also from the rest of the busy pack which have thus far comprised the blockbuster class of summer 2017.  War appropriately begins with all the constituent parts which its very title suggests.  Holed up in a lush forest some time after the events of Dawn, Caesar (Andy Serkis) and his loyal troops are just about hanging on in their seemingly perpetual struggle for survival.  Their forces have become depleted as a result of repeated incursions by a shadowy army who answer to a figure simply known as The Colonel.  These men are intent on their purpose donning as they do helmets which read ‘Monkey Killer’ and ‘Bedtime for Bonzo.’  Such perverse humour is only fleeting, however, just as Caesar’s efforts at a peaceful settlement are destined to fail.  When the latter suffers unimaginable personal loss at the hands of The Colonel (a furrowed and seething Woody Harrelson), he vows vengeance at the exact moment he recalls the singular vision which drove his ape nemesis Koba in Dawn.  This is Caesar’s very own heart of darkness and, in one of several allusions to Coppola’s Apocalypse Now, he sets off on a quest of reprisal which supplants the leadership and guidance he is supposed to provide to others. 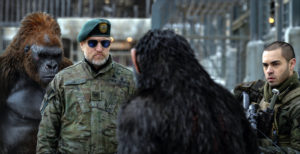 At various points Caesar is reminded of the duty he has now effectively renounced and we can only imagine the consequences which will ensue as he rides into this valley of darkness.  The benevolent Maurice (wonderfully played yet again by Karin Konoval) compares Caesar to the spiteful Koba on more than one occasion.  The ape leader himself even has visions of his former enemy after breaking one of his own cardinal rules.  But his sense of mission is relentless and directed solely at The Colonel whom he holds accountable for the slaughter which has taken place.  A host of western motifs and stock elements come to mind as Caesar and his modest posse journey to the location where they believe The Colonel and his troops (more like acolytes mind you) are situated.  There is a glorious image of the apes on horseback set against a dusk-laden seascape which veteran directors in the Planet series such as Franklin J. Schaffner and J. Lee Thompson would be most proud of.  It also brings to mind a similar shot from Ford’s iconic western The Searchers as John Wayne and Jeffrey Hunter spend several years searching for Natalie Wood.  If Harrelson’s shaven-headed Colonel is the Kurtz of this piece – as many reviewers have already suggested – then Caesar is surely more than reminiscent of Wayne’s Ethan Edwards.  With the homestead destroyed, he sees only one purpose for himself and this overrides all other concerns.  Even the discovery of a mute war orphan named Nova (Amiah Miller) is, at first, an inconvenience which he would rather not bear.  But the kindly Maurice – the moral centre of War – refuses to desert the youngster and brings her on the odyssey to the slight chagrin of his leader. 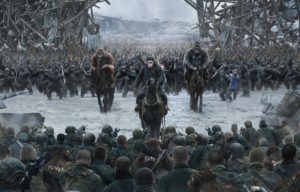 Caesar’s somewhat unwanted retinue expands even further as they encounter ‘Bad Ape’ (Steve Zahn), a common chimpanzee who was previously housed in the Sierra Safari Zoo.  In a nicely-measured performance, Zahn manages to effect an underlying pathos in the character, even as he provides flourishes of comedy elsewhere.  War is rich in so many excellent turns by its talented cast.  I previously mentioned Konoval in this regard and newcomer Miller also deserves kudos for her performance as the spirited Nova.  We all know how good Harrelson can be when the material is strong enough.  Yes, his colonel is fixed in his stares and vaguely rambling in his philosophy, but Harrelson also manages to remind us that there was a human being in there once upon a time.  The Colonel has his own backstory and is not just a one-dimensional carbon copy of Kurtz; his final scene with Caesar (although evocative of another one which any cinema-literate individual will recognise) borders on the pitiable and conveys a message which may be very difficult for us to digest – even the most iron-willed and savage of tyrants has a background and a history.  The Colonel has crudely etched this very word – History – into a wooden beam in his quarters.  Elsewhere, there is sterling work again from motion-capture regular Terry Notary who plays Rocket.  Andy Serkis, meantime, is truly sublime as the increasingly conflicted Caesar.  With even more dialogue at his disposal than Rise and Dawn combined, Serkis delivers an immense performance which exceeds even his high standards in the motion-capture field.  Canadian actor Ty Olsson completes a fine set in this regard playing Red, a western lowland gorilla who was once a supporter of Koba.  A staunch ally of The Colonel’s now, Red is referred to, and even marked, as a Donkey – apes who are defined and informed by their servile duty to human beings. 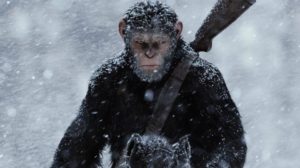 The Planet films have always been noted for their underlying themes and allegorical layers and War does not flinch in this respect as it addresses contemporary issues such as the heavy cost of prolonged conflict.  Elsewhere, writers Reeves and Mark Bomback have much to say on the matter of internment and the very real sense of abasement such a state brings about.  When Caesar pleads for food and water for his fellow apes, one can imagine such words being uttered in countless historical and, indeed, present-day contexts.  War has an epic sweep to it which David Lean would justifiably praise and director Reeves himself has referenced the Oscar-winner’s 1957 The Bridge on the River Kwai in this regard.  Upon seeing his captured people in The Colonel’s wintry compound, Caesar repeats the climactic line of Alec Guinness’s Colonel Nicholson – ‘What have I done?’  The Colonel’s employment of the slave apes to build his wall arouses memories of Saito’s incessant drive to construct the bridge which will connect Bangkok and Rangoon.  War though is ultimately a story of redemption and the eventual realisation of its central character that the many are much stronger than the few or the one.  The ending may be a tad heavy in terms of symbolism, but it works quite beautifully with respect to the whole and the trilogy generally.  In terms of technical achievements, one would expect an Oscar nomination at the very least for visual effects once again.  The cinematography of New Zealand veteran Michael Seresin should also be in line for such a nod.  American composer Michael Giacchino (Up, Star Trek, Dawn of the Planet of the Apes) delivers only one of the most stirring and emotionally-resonant scores of recent years.  Stirring and resonant are in fact words which can be applied to War in a general sense.  It’s not just one of the best Planet films to date, but also one of the very best of 2017 and expect to see it on many such lists at year’s end.  If you’re a fan, you will applaud and cheer and wish that all franchise films were this good.  If you’ve yet to discover the series, then I’d suggest you start as soon as possible because…well…didn’t I just suggest that this is one of the greatest franchise films of all time?