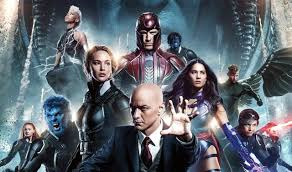 The ninth instalment of the X-Men is one of the more disappointing entries in the series and, certainly, the weakest yet delivered by Bryan Singer (on X-directing duties for the fourth time in all).  Here’s the premise – in Ancient Egypt En Sabah Nur/Apocalypse (a heavily disguised Oscar Issac) seeks to attain immortality (don’t we all), but, alas, some of his more fickle followers have other ideas.  Sabah Nur is entombed in a temple and awakened in 1983 by a silly cult below what is now a bazaar in modern-day Egypt (or close enough).  Sabah Nur recruits a mutant he encounters in the market and by means of an everyday television set (curiously screening an old Star Trek episode – see if you can recognise it) acquires English and a comprehensive knowledge of the contemporary world.  Trouble is he doesn’t like what he sees, and decides that mankind is in need of an overhaul by way of his administration.  With me so far?  The problem here is that Sabah Nur’s motives are pretty hazy.  Does he want to destroy the world?  It seems not, but why decide to decimate what you wish to rule?  Is there an overarching plan here?  Sabah Nur does not strike me as the cleverest of villains ever.  Still though as a mutant himself, he recognises that the means to achieve his plot of mass destruction is to employ a few of those X-Men who inhabit this world, one of whom includes Erik Lehnsherr/Magneto (Michael Fassbender).

In contrast to its predecessor in the X-series (the excellent Days of Future Past) Apocalypse is a rather bloated exercise which fails to find a suitable rhythm throughout and limps towards a fairly predictable conclusion involving the good X-Men and the borderline ones pooling their resources to…yes you guessed it.  There is a noticeable dearth of humour in this one save for some religious mutterings courtesy of Kurt Wagner/Nightcrawler (Kodi Smit-McPhee) and a nicely observed scene involving Xavier’s awkward reunion with Moira MacTaggert (his former lover in First Class – remember?), despite the fact that she no longer remembers their past together.  The best sequence perhaps in Days of Future Past belonged to Quicksilver and, thankfully, the swift-of-foot one delivers here again to the strains of Sweet Dreams (Are Made of this) by the Eurythmics (itself, incidentally released in good old 1983).  Elsewhere we see some of the X-teens leaving the cinema having viewed Return of the Jedi and we also catch a glimpse of Quicksilver sporting an Atari t-shirt and playing an arcade game of what appears to be Ms. Pac-Man.  But Apocalypse doesn’t have a nostalgia feel for a bygone era as Days of Future Past had, and pretty quickly the film lurches rather clumsily towards its denouement back at Sabah Nur’s base where he has resurrected his former temple. 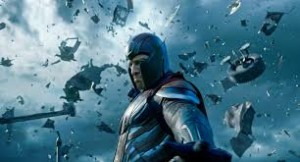 He’s been a busy demi-god in the meantime because he’s recruited his very own four horsemen of the apocalypse, including the emotionally torn Magneto (who has recently lost his domestic bliss in Poland), Psylocke, Angel and Storm.  Having managed to escape William Stryker’s Weapon X facility (thanks to a brief appearance by a tortured and uncommunicative Wolverine) the chief X-players arrive in Cairo seeking to foil Sabah  Nur and his recruits as Magneto literally tears the planet apart pole from pole.  The special effects in this particular sequence are pretty much substandard in this reviewer’s humble opinion and the eventual defeat of Sabah Nur (well what did you expect?!) is not terribly exciting; in fact, truth be told, downright unimaginative.  Not that I’m saying Apocalypse is entirely devoid of some commendable points.  As with the previous two films, there’s a fine cast on display here and the regulars (as they are now) Fassbender, McAvoy, Lawrence and Hoult all excel.  Game of Thrones’ Sophie Turner does well enough as Jean Grey and the returning Quicksilver (Evan Peters) has, as I mentioned the film’s best sequence to himself, and also some of the best lines.  But then that’s all negated somewhat with the rather convoluted plot point concerning who his real father is (I won’t give this away in case you haven’t seen the film, but paternal issues yet again – come on!!).  Elsewhere Wolverine is rather wasted as I mentioned and the film misses Hugh Jackman’s charismatic presence.  Olivia Munn is given next to nothing to do apart from a ropey take on Wonder Woman; and Josh Helman is pretty much one note as the dastardly William Stryker.  On the plus side, it’s good to have Rose Byrne back and the great Stan Lee makes his usual welcome cameo appearance.

So what next for our X-friends?  Another Wolverine stand-alone film is scheduled for release in March, 2017, and it is said to mark the final appearance of Jackman as Wolverine.  Singer apparently has designs on doing an X-movie in outer space; and screenwriter Simon Kinberg has stated that the next film will be set in the 1990s.  There’s no word yet as to when this eleventh instalment might appear, but one would hope that, if both returning, the director and screenwriter might revert to basics somewhat and deliver a film with just a little more heart and a few more laughs.  Apocalypse is by no means terrible, but it’s a few notches down from First Class and Days of Future Past and dare I suggest those new X-recruits need to give the series back its X-factor.