Well!  How about that Oscar ceremony!  The 92nd Academy Awards went pretty much the way we expected they would go – almost to the end that is.  Then there were two notable surprises and how!  Bong Joon-ho won Best Director bucking a trend in awards season which had suggested that 1917’s Sam Mendes (who had just recently won at the DGA awards) would prevail.  Then came the real pivotal moment of the night.  To tumultuous and much-deserved applause, Jane Fonda announced that Parasite was the Best Picture winner for the calendar year 2019.  It was the first time in the Academy’s 92-year history that a film not in the English language managed to secure the top prize.  In total Parasite – and Bong Joon-ho for that matter – took home an astounding four major awards, which also included the newly-named Best International Feature Film and Best Original Screenplay.  Here are the main talking points of the 92nd awards as they unfolded: 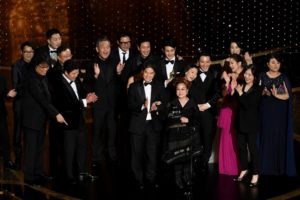 Not only was it the Best Picture of the night, but Parasite also became just the second film in cinema history to win both the Palme d’Or at the Cannes Film Festival and also the top prize on Oscar night – 1955’s Marty was the previous film to accomplish this considerable double.  It was a genuine surprise on the night, but – in the lead up to the ceremony – it was clear that Parasite was more than in the hunt apropos the favourite 1917.  The most significant indicator in this latter regard was its triumph at the Screen Actors Guild Awards in January when it became the first non-English language film to win the award for Outstanding Performance by a Cast in a Motion Picture.  Actors form the largest bloc of voters in the Academy membership, so the portents were certainly there and could not be ignored.  Parasite got over the line and made Oscar history in the process. 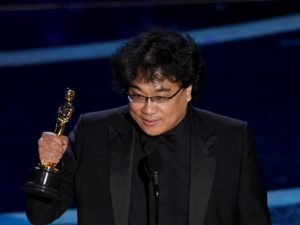 Another major surprise on the night…and yet.  Having won the Directors Guild of America award in January, as well as a Golden Globe and BAFTA, Sam Mendes was most definitely the favourite going into the ceremony as he sought to win his second Academy Award for Best Director.  But it was Bong Joon-ho’s night as the South Korean filmmaker pipped the Englishman to the top prize for work behind the camera.  With wins also in the categories for Best International Feature Film and Best Original Screenplay, Bong Joon-ho became the only person ever to win four awards for a single film at the same ceremony.  Whatever he does from here (and we fervently hope it will be much and for an extensive period of time), the South Korean’s place in Oscar history is already more than secure.  At the post ceremony interviews backstage, he simply did not have enough hands to hold all of his awards. 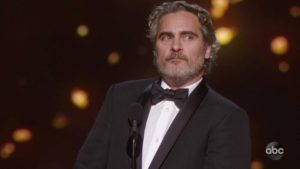 The main acting categories – Best Actor and Best Actress – provided no major surprise on the night as we previously predicted, but the real source of joy here was seeing Joaquin Phoenix secure a long overdue win.  The jury is still out as far as I’m concerned on Joker as a film, but there’s little doubt that his presence in the comic book-based movie elevated its overall status and subsequent critical reception.  For the record also – and in another instance of Oscar history on the night – the Joker became only the second character ever to have two actors win Academy Awards for their respective portrayals – Phoenix and Heath Ledger in 2008’s The Dark Knight (Marlon Brando and Robert DeNiro won Oscars for playing Vito Corleone in The Godfather and The Godfather Part II).  In the Best Actress category, Renee Zellweger won – as fully expected – for her performance as Judy Garland in the biopic Judy.  It was the Texan’s second competitive Oscar having previously won Best Supporting Actress for 2003’s Cold Mountain. 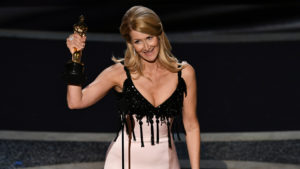 If the main acting categories felt like a foregone conclusion going into the ceremony, then ditto also for the supporting acting awards.  Brad Pitt and Laura Dern had mopped up all the major gongs (including SAG, BAFTA and Golden Globe) en route and it never felt remotely possible that they would fail to convert on the biggest night of them all.  They both delivered excellent speeches which alluded to the differences in their respective backgrounds.  Dern – whose parents are actors Bruce Dern and Diane Ladd – definitely hails from Hollywood royalty and she referred to this when she made a quip about meeting one’s heroes.  Pitt – on the other hand – paid tribute to his parents as he reminisced about seeing Butch and Sundance on the big screen as a kid and then, later on, packing up for Hollywood in his search for fame and fortune.  It was a pertinent allusion and served to remind us of how many actors and actresses in the world have shared and continue to share this common dream.  Oscar night is mostly about the glory and glamour, but it’s also equally important to remind ourselves of the sacrifices many of these people make along the way.  Well done to Laura and Brad in this respect.  They were both humble in their speeches and did not forget the role loved ones have played in their artistic success.