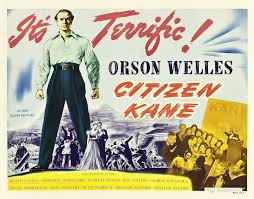 May 1st, 2016 marks the 75th anniversary of a seminal moment in the history of not just American cinema, but narrative cinema as a whole.  For it was on the 1st May, 1941 – a few short months prior to Pearl Harbour and America’s entry into the Second World War – that RKO Radio Pictures premiered a certain troubled production by a twenty-something first-time director/actor at the RKO Palace Theatre on Broadway in New York City.  The production of Citizen Kane had not been problematic in the sense of a latter-day Heaven’s Gate or Ishtar.  True it was that Welles himself was a novice to the medium – as were many of the principal players in his cast – but he had not exceeded his overall budget in any bombastic way, nor had the length of the shoot spiralled out of control to the great detriment of the film’s overall timetable.  If anything, the production of Kane was quite a smooth one comparatively.  Welles had actually begun shooting his first film in secret, so as not to attract undue attention from snooping studio executives.  He declared these as camera tests, but in truth much of the footage captured was to eventually make it to the silver screen.  The El Rancho nightclub scenes for example; the journalist Thompson’s interviewing of Leland and Bernstein.  It wasn’t until July 1940 that RKO 281 (as it was known during production stage) began its official shoot.  By then Welles had a nice body of footage already compiled.  More than enough for a good head start.  Orson would be full of such ingenuity and improvisation throughout the whole of his career.  He already had many such tricks up his sleeve at this young age. 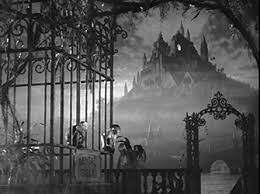 The chief controversy for Kane arose out of its subject matter, namely the central character of Charles Foster Kane himself – as portrayed by Welles.  We first encounter him in his palatial estate called Xanadu, an elderly man on the verge of his physical demise.  The word ‘Rosebud’ is uttered in a near-sibilant whisper as a snow globe slips from his hand and smashes on the floor.  Newsreel footage briefly sums up his like and times.  Then a journalist, Jerry Thompson, is tasked with the mission of discovering who ‘Rosebud’ might have been.  He begins his investigations and we are presented with a narrative told by several voices.  The first proper glimpse we get of Kane is as a young boy.  After a gold mine is discovered on his parents’ property, the young Charlie is sent away for a formal education.  He leaves behind him the snow of Colorado and a certain precious item.

Kane is of course a quasi-biographical film.  The character of the newspaper magnate is partly based on Chicago tycoons Samuel Insull and Harold McCormick.  There are also notable arguments and backed-up theories that aspects of Welles’ own life informed the character.  However, the chief inspiration behind Kane is undoubtedly that of William Randolph Hearst – the newspaper man who established America’s largest chain and influenced many of its practices, often referred to as yellow journalism.  There was also the not-so-insignificant matter of a certain Spanish-American war he helped promote.  It was the not-so-vague parallels with his life that caused Kane its problems prior to release, and thereafter.  Hearst did everything in his considerable power to have the film supressed.  He prohibited all of his own newspapers and agencies from mentioning the film.  Reviews were not allowed between the pages of his daily editions.  Any positive remarks concerning the wunderkind’s cinematic debut were a most definite no-no.  Welles railed against this and used it as a pretext to garner more advanced screenings and previews.  This worked to a certain extent, but the campaign of Hearst, and employees such as Louella Parsons, did indeed damage the commercial potential of the film, and that of the expectations of its creators.  After Kane had run the gamut of its theatrical release in 1942 it fell into a period of obscurity.  Its chief architect moved on to The Magnificent Ambersons, but this latter project turned out to be an even more painful experience.  He did not have final cut as he’d done on Kane.  RKO re-cut Ambersons despite his many objections.  Such set-backs and disappointments were to be commonplace in Welles’s remarkable career. 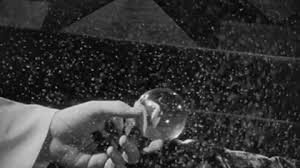 But what of the film itself in latter-day cinematic terms?  How does it hold up after 75 years of life?  Well there’s little doubting the influence Kane continues to exert on the filmmakers of today.  A whole host of writers and directors have cited it as one of their favourite films and a very important element in their cinematic education.  The film’s style and narrative trajectory have been subjects of near-universal praise.  They were influential on noirs of the 1940s and 1950s.  The constant employment of flashbacks in Kane had not been to that scale at that particular moment in time.  Films that came after such as Kubrick’s The Killing and Kurosawa’s Rashomon made great use of this technique, as well as that of the unreliable narrator.  Themes from the film can be seen in such recent iterations as Paul Thomas Anderson’s There Will Be Blood and The Master.  The Social Network has even been compared in terms of its portrait of an overnight mogul and his gradual alienation from friends and loved ones.  The overhanging memory and nostalgia for a more innocent time that Rosebud embodies has also informed many works.

It’s interesting to note the significant role television played in all of this.  TV vivified the fortunes of Kane and brought it to the attention of a wider, more populist audience from the mid-1950s onwards, just as it did with Frank Capra’s It’s a Wonderful Life in the 1970s.  Thankfully, RKO was one of the first studios to sell its library to television – this occurred in 1956.  One other thing of key significance happened that same year.  The influential American critic Andrew Sarris wrote a piece in which he described it as, ‘the work that influenced the cinema more profoundly than any American film since The Birth of a Nation.’  That was high praise indeed at the time and it certainly served to engender and fortify the film’s gradual revival in critic circles just as it was being broadcast all across American homes.  Since then Kane has frequently been hailed as one of the most seminal films in history.  Also, it has topped many polls over the years, not least the famous Sight and Sound poll conducted every decade since 1952 (it first topped this in 1962).  One recent qualification to this however: the 2012 poll saw Kane lose its top position for the very first time since 1962.  It was displaced by Hitchcock’s Vertigo – a testament to that film’s rise and rise in estimations.  Perhaps Kane will regain the top spot in 2022.  Even if it doesn’t, its status and place in film lore is long since assured. 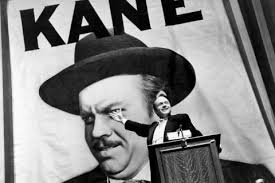 If you haven’t already seen Citizen Kane, then here are four key elements to watch out for in particular:

Kane’s backstory is revealed as the reporter Thompson interviews former friends and loved ones in his quest to unravel the mystery of ‘Rosebud.’  He speaks to Charlie’s second wife, Susan Alexander Kane, his business manager Bernstein, his estranged friend Jedediah Leland, and Xanadu’s butler Raymond.  Each of these offers a narrative thread, a fragment of a life.  They may well be unreliable.  One even acknowledges haziness as regards his own memory.  None can offer a solution to the hanging question that is ‘Rosebud’.  The design here is to heighten the notion of an enigma wrapped in a riddle – that being Charles Foster Kane himself.

The extensive use of flashbacks:

Kane was not the first film to use the device of the flashback, but it most certainly was ground-breaking in terms of the extent of usage.  Some of the flashbacks overlap and are told from different perspectives.  The multi-layered narrative approach informs these flashbacks as they are recounted by different sources.  Some notable American films which followed took their cue from this technique.  Consider, for example, Kubrick’s The Killing mentioned elsewhere here.  More recently Quentin Tarantino employed flashbacks from different sources in Reservoir Dogs.  The overall effect suggests we are receiving more than just a modicum of the truth.

Renowned cinematographer Gregg Toland was not shy in his admission about wanting to work with an untried filmmaker such as Orson Welles.  He admitted he felt he would have more latitude to experiment with a newcomer as opposed to a veteran.  The most striking aspect of Kane’s compositions and photography is its use of deep focus.  This means that the foreground, background, and all in between, are in sharp focus.  Another significant innovation was the employment of low angle shots.  This technique is especially noticeable in the confrontation scene between Welles and co-star Joseph Cotten.

Kane was Bernard Herrmann’s first motion picture score and it more than established his considerable credentials.  He employed short musical cues throughout which often denote a particular emotional response.  The famous breakfast montage scene involving Kane and his first wife Emily is a very good example of this.  In a matter of seconds we are taken through several years of their married life together and Herrmann’s score emphasises the tension and hardening of emotion between them.  The passage of time has seldom been condensed so well as this.  And music has seldom been employed so well to elaborate on the theme of a love decaying.  Herrmann himself would go on to a very fine career in Hollywood, most notably by way of his collaborations with Alfred Hitchcock.  Kane was the one that set him on this particular road.