The Blogger’s Word: Revisiting Huckleberry Finn and His Friends 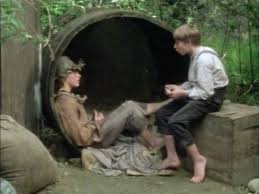 I recently purchased a DVD copy of the 1979 television series Huckleberry Finn and His Friends starring Ian Tracey as Huck and Sammy Snyders as Tom Sawyer.  By my own reckoning I would imagine I first saw this 26-part series on Irish television when I was about eight years old.  The show made a huge impression on me as a young boy and I’m happy to say that revisiting it as an adult was an absolute delight.  The thing about watching a TV series that you loved as a youngster is that you do naturally approach it a later age with a certain degree of trepidation.  The foremost concern on my mind as I began episode 1 – Welcome Neighbour – was would it be good as I remembered.  Would there be shortcomings I might notice given the passage of time?  Or would some of the gloss be gone?  After all, I hadn’t seen the series in the intervening 35 or 36 years.  I’m glad, therefore, to say that it more than lived up to my memories and expectations.  And then some.

A German-Canadian co-production which was spearheaded by producers Robert Stabler and Thomas Wagner, the series was shot in Canada (for financial reasons), mainly around the Vancouver area, with the nearby Fraser River doubling as the Mississippi.  The cast itself was made up largely of Canadian and German players.  Tracey and Snyders were both Canadian.  Actors such as Brigitte Horney and Dinah Hinz, who played Aunt Polly and Aunt Sally respectively, were German.  The one exception to this in the prominent credited cast was American Blu Mankuma who played Jim.  Others who featured in episodes included Alex Diakun as the treacherous Injun Joe and Bernie Coulson who was cast as Sid Sawyer.  Watch out also for a young Bruce Greenwood who appeared in three of the later episodes playing Bob Grangerford, a member of a well-to-do family which is at war with a neighbouring clan. 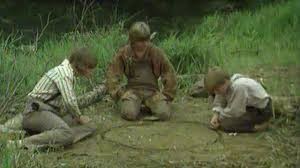 The main players were pitch-perfect in their respective roles.  An amalgamation essentially of Twain’s two most famous works The Adventures of Tom Sawyer (1876) and The Adventures of Huckleberry Finn (1884), the 10-hour plus television series gives more screen time to Huck’s character than Tom’s, whilst essaying that character’s relationship with the oft-mischievous and hooky-playing schoolboy, and the gentle runaway slave Jim.  Ian Tracey appears in all 26 episodes of the series and really it’s difficult to imagine any other child actor in the iconic part.  Softly-spoken and wide-eyed, his Huck Finn lasts long in the memory after the conclusion of episode 26.  The same can also be said of Sammy Snyders as the constantly imaginative and adventure-seeking Tom.  In the Making Of documentary which I watched as part of the DVD set (from the mid-2000s I imagine), the grown-up Snyders admitted that, as a twelve-year-old actor, he didn’t always learn his lines.  If such was the case this doesn’t come across onscreen whatsoever and Snyders makes for a near-perfect realisation as Tom.  Blu Mankuma as Jim, the other most prominent cast member, really came into his own during the second half of the show as well as the series moved into the chronicles of Huck Finn per se.  His scenes with Tracey on the raft are particularly memorable as they discuss some life matters.  Brigitte Horney – although dubbed it would seem – is also excellent as Aunt Polly.  Fellow German actress Dinah Hinz also fares well as Aunt Sally, albeit with lesser screen time. 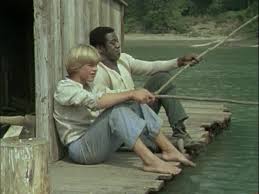 The period feel to the show is very well realised in spite of the budgetary constraints which informed the producers decision to shoot in Canada as opposed to south of the border where the two novels are set.  In the Making Of documentary producer Wagner explains the reasons for this and also makes reference to some of the locations used and dwellings utilised.  Happily, it seems, Tom’s house is still standing.  The interior sets I would suggest do hint a little at the monetary moderation which had to prevail, but these are offset by the glorious photography outdoors.  Both of Twain’s classic novels involve the great outdoors to a large extent and it’s wonderful to see the Canadian landscape substitute appropriately for its American counterpart.  I must also make particular mention of a great musical score by Ted Ottley.  Many of the tunes and leitmotifs were still stuck in my head after 35 years or so and watching the series again brought them back to mind with all attendant nostalgia. 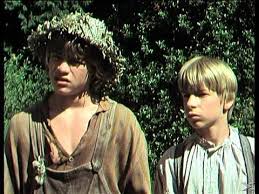 The show has so many memorable moments and why wouldn’t it of course when you consider the wealth of source material it has at its disposal.  The first half of the series – derived from The Adventures of Tom Sawyer – involves for example the famous whitewashing scene (episode 2 – Love in Bloom) in which the as-always wily Tom manages to talk a number of boys into painting his Aunt Polly’s fence on his behalf.  The lurking danger which is presented by Injun Joe’s character in episode 4 (Mystery at Midnight) is offset somewhat by the following The Pirates episode, but returns in episode 8 – Muff Potter’s trial – when Huck and Tom reveal what they saw in the cemetery the night of Dr. Robinson’s murder.  Injun Joe returns in episode 10 – Huck is a Hero – but, his fate is sealed in the caves where he has hidden his loot.  The series undergoes something of a transition in episodes 12, 13 and 14 as Huck is briefly adopted by the Widow Douglas and Miss Watson.  Huck’s abduction by his mean ‘Pap’ – who wishes to lay his hands on the small fortune Huck has acquired with Tom – forces the former into faking his own death and this leads to his reuniting with Jim and determining to head to a free state now that Jim is a runaway slave.  These scenes shared between Ian Tracey and Blu Mankuma are in so many ways amongst my favourites from the TV show, but I also have to express my great love of the very final few episodes when Tom Sawyer re-enters the plot.  The characters of the Duke and Dauphin, the warring families of the Grangerfords and Shepherdsons having been dispensed with, the winning trio of Huck, Tom and Jim are so memorable and admirably played by the leads.  The penultimate episode 25 – The Rescue – has Tom concocting an overly elaborate plan to free Jim involving clandestine messages warning of a murderous gang, and secret tunnelling under the shed where the runaway slave is being held.  Snyders and Mankuma are particularly brilliant in these scenes; the young actor exuding the enthusiasm for adventure his character holds dear; the older actor, meantime, displaying Jim’s great patience with the subterfuge, anxious as he is not to disappoint his young friend.

Fans of the show, and readers of Twain, will know full well that Tom’s overthought plan almost backfires on himself with fatal consequences.  Episode 26 – The Whole Truth – sees a mad dash to save the injured Tom with Jim in particular sacrificing his own chance at freedom.  But there’s a happy ending of course and the very final scene of the series – involving, most appropriately Tracey, Snyders and Mankuma – has the friends agreeing to head out west now that Jim has some money of his own and Huck’s ‘Pap’ is dead.  The only pity is the series could not have gone on further.  I, for one, could have lived with many more episodes.  But, as is, Huckleberry Finn and His Friends is a gem of a show which perfectly realises the tenor and milieu of Mark Twain’s work.  I’m happy to say that it more than stands the test of time and I’d encourage anyone to either revisit it or pick up this classic television series for the very first time.  Here’s to Huck and Tom.  And Jim as well.