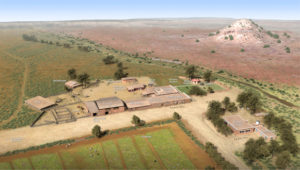 My morning rise on this the tenth full day of the tour is at 5.30 and, following a shower and the daily start of my journal, I venture down towards the restaurant area of the hotel seeking some hot food and caffeine-laden coffee.  The dining area in the Canyon de Chelly Holiday Inn does not open until the slightly unusual time of 6.40, but, once available, the buffet choice on offer works the trick and my sustenance requirements for the early part of the day are duly satisfied.  The coach leaves at the slightly later time of 8.30 this morning and we make our first official stop of the day at the Hubbell Trading Post National Historic Site on Highway 191 in Apache County, Arizona.  Maintained as an example of a 19th-century trading post, Hubbell was purchased in 1878 by John Lorenzo Hubbell and was declared a National Historic Landmark in 1960.  A store still operates on the site to this day and transactions are completed in the contemporary form of universal currency as opposed to bartering or negotiation.  Elsewhere on the site there are some artefacts of historic interest which include a two-storey barn and some outbuildings.  Our stop here is for some 45 minutes and by 10 a.m. we are back on the road again and headed in the direction of Gallup, New Mexico.  For the record, this will represent the eighth state in total which we have either visited or traversed during the course of the Rocky Mountain Frontiers tour. 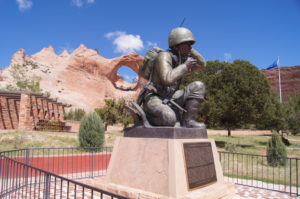 There is some more history to be taken in en route however and this comes by way of the Navajo Code Talkers Memorial which is located in Window Rock, Arizona.  This is a bronze statue which commemorates the Navajo Code Talkers who played an important part during the Second World War in the South Pacific theatre of operations by communicating in a Native American language which the enemy was never able to decipher.  The name of the major local landmark – namely Window Rock – derives from the Navajo word rock-with-hole-through-it.  In the same area there is a Navajo Nation World War II Memorial dedicated to those who made great personal sacrifice during the course of the global conflict. 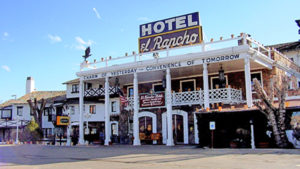 Departing from here at 11 a.m. approximately, we soon enter the nearby city of Gallup at 11.25.  The stop here is a more functional one and the majority of us take the opportunity to grab some lunch.  A local Subway appears inviting today and my choice for some repast is a tuna sandwich on flat bread with the obligatory cup of coffee.  Travelling on from here, we soon find ourselves on the historic U.S. Route 66 which extends from Chicago, Illinois to Santa Monica, California.  The true delight of the afternoon arrives when we reach the famous El Rancho Hotel which opened in 1937 principally as a base for movie productions.  Famous guests who stayed here whilst on location work in the vicinity included Spencer Tracy, Kirk Douglas, John Wayne, Alan Ladd and future US president Ronald Reagan.  One level up in the hotel contains an assortment of picture frames from Hollywood of a bygone era.  If you can name every single face that you see on display, then you certainly have a much better memory for cinema lore than most. 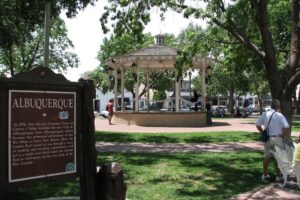 Our eventual destination for this leg of the tour is Albuquerque, New Mexico’s most populous city which is situated in the north central part of the state.  Arriving on the outskirts of this urban area at 3.30 in the afternoon, we proceed to the Old Town part where we are left to our own devices until 5.  This is the original historic town site which was laid out by Spanish colonists in the 1700s and most of the buildings were constructed here between 1870 and 1900.  The adobe building material is prominent in many of these and the most famous is perhaps the San Felipe de Neri Church which was built during the 18th century.  At the centre is Old Town Plaza which is surrounded by a plethora of shops, restaurants and galleries.  For the souvenir hunter and t-shirt collector (guilty as charged), there is much on offer and practically every store contains items of clothing and other such knick-knacks related to the television show Breaking Bad which was set and filmed in Albuquerque between 2008 and 2013.  In spite of the numerous references to him, I never get to spot Heisenberg during our short sojourn in this area.  Should I honestly be surprised by this given the way the series finale concluded? 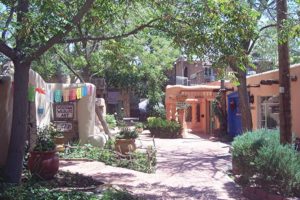 Our hotel for the night is the Best Western Plus Rio Grande Inn and I have just enough time for a shower prior to the optional outing for the evening.  The venue in question is the Highnoon Restaurant and Saloon which is appropriately located in the aforementioned Old Town area.  A Caesar Salad is followed by the Platter Combo and then a pudding desert, which looks just like a chocolate muffin.  Two beers are imbibed to wash this down and, upon our return to the Best Western later on, myself Marc and Stephen decide on two more beers as a sort of nightcap – Alien Ambers in my case (as in Roswell, New Mexico – get it).  We’re due to depart Albuquerque at the much later hour of 9 in the morning, so we can afford to push the boat out in this way.  On that very note, the Alien Ambers go down just fine.  Nothing in the least bit otherworldly about them I’m glad to say.