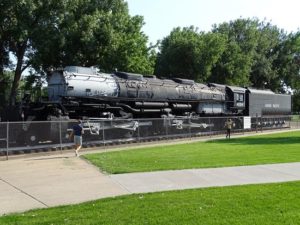 The second full day of the Rocky Mountain Frontiers tour is also Labor Day in America and I’m up at the slightly ungodly hour of 4.30 a.m. after a pretty good night’s sleep.  Having procured a new phone just prior to my departure from Dublin, I’m more than anxious to share some images on Whatsapp, but the pictures I send of a darkened street in Cheyenne are hardly the most awe-inspiring of all time.  No matter I figure – the places we will be visiting later on this 3rd day of September ought to be of greater interest to my very small audience; Mount Rushmore in particular.  The National Memorial, which was completed in 1941, is arguably the first headline destination of this trip.  I wonder if it will be as impressive as it appears in Hitchcock’s North by Northwest.  Unlike Cary Grant and Eva Marie Saint, I doubt very much that I’ll have the occasion or reason to dash along the top of it.  After a satisfying buffet breakfast, we depart from the Red Lion Hotel in Cheyenne at 8 a.m.  Before leaving the Wyoming state capital, we stop to visit one of the Big Boys (one of eight remaining locomotives which were operated by the Union Pacific Railroad until 1959).  The 4004 – which was retired from service in 1958 – is located in Holliday Park.  The name Big Boy – which apparently derives from an anonymous worker who scrawled this in chalk on the front of one of the engines – is indeed well merited.  With a 4-8 8-4 wheel arrangement, it’s little wonder that these locomotives were capable of hauling freight over the Wasatch Mountains. 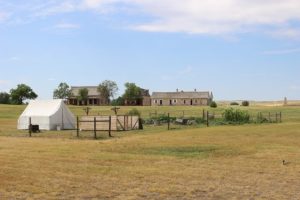 We make another quick photo stop at the state capital building at 8.20 a.m. (which is currently being renovated) and then it’s on towards Fort Laramie National Historic Site in Goshen County, Wyoming.  But before all of that necessary provisions for the day ahead must be sought out at a Safeway along the route.  There’s a deli in the large supermarket, but I’m either too lazy or too impatient to join the queue which consists of some of my fellow group travellers.  Instead, I acquire for myself a super-sized ham and cheese roll which I could never possibly devour in a day let alone an afternoon.  American portions certainly do cater for those of a very large appetite I conclude.  The Big Boys are not just a term which can be applied to the locomotives.  On the way to Fort Laramie, Adrian plays a number of appropriate country and western songs on the coach.  Don’t Fence Me In by Cole Porter certainly evokes thoughts of the open range and a free life which is without boundaries or restrictions.  The theme song to the television series Rawhide (which featured one Clint Eastwood) seems even more familiar and has earned its place as one of the Top 100 western songs of all time.  Over the years, it’s been covered by a plethora of artists which includes Johnny Cash, The Blues Brothers and The Jackson 5.  Arriving at Fort Laramie at 11.10, we wander around the former trading post which dates from circa the 1830s.  This was a primary stopping point on the Oregon Trail located at the confluence of the Laramie River and the North Platte River.  Today, the remaining structures on the site are preserved by the National Park Service. 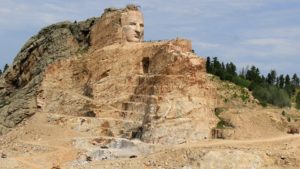 Having consumed as much of my enormous roll that I can manage, I view the interiors and exteriors of the buildings prior to our departure at 12.30.  Two hours later – exactly – our coach passes into South Dakota and the excitement concerning Mount Rushmore begins to rise palpably (at least as far as I’m concerned).  En route, we stop for a quick photo opportunity at the Crazy Horse Memorial.  Located approximately 17 miles from Mount Rushmore, this monument has been under construction since 1948 and, if completed, may very well qualify as the world’s largest sculpture.  Intended as a dedication to the Oglala Lakota warrior Crazy Horse (who participated in several famous battles of the Indian Wars, including the Battle of the Little Bighorn), the memorial is far from completion, but work continues some 70 years later.  The actual final resting place of the Native American war leader remains a mystery to this very day. 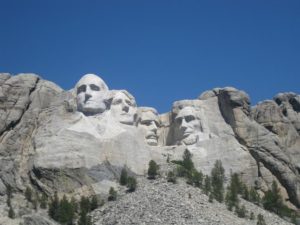 It’s difficult to describe the precise feelings one has when an iconic location finally comes into view and is there on the horizon just in front of you.  From the initial perspective of the coach window the Mount Rushmore National Memorial appears somewhat smaller than expected.  It’s only when you get off the bus and walk towards it that you truly appreciate its scale and the extent of this sculpted endeavour.  Earlier in this article I referenced the 1959 Alfred Hitchcock film North by Northwest which, famously, utilises the monument in its climactic scene (remember Eva Marie Saint dangling precariously as Cary Grant extends a rescuing hand?).  There’s also a quite humorous scene in 1980’s Superman II whereby Terence Stamp’s General Zod has the faces of three of the four presidents modified to his own design.  For the record the presidents who are depicted in the granite face of Mount Rushmore are George Washington, Thomas Jefferson, Teddy Roosevelt and Abraham Lincoln.  The more-than sizable undertaking spanned from 1927 to 1941 and was largely overseen by sculptor John Gutzon Borglum (who died in 1941 prior to the monument’s formal completion).  The four presidents were selected on the basis of their contribution to American history up to that particular time (i.e. the late 1920s).  Borglum stated that his plan was to ‘make Rushmore a center in the heart of America so attractive, so comprehending, that the inevitable visiting world will assemble there with something more than curiosity, and go away with something more than wonder.’  Departing again at 5.10 that evening, it’s impossible to disagree with this assertion.  This is a wonder of the modern world and then some more. 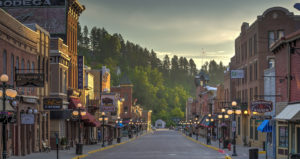 Our final destination for the day is Deadwood in South Dakota where we arrive at 6.15 in the evening.  On the coach, we traverse the historic main street of the city which is famous for its gold rush history and celebrated personalities.  To think that iconic figures from yesteryear such as Wild Bill Hickok and Calamity Jane once breathed the air in these parts causes quite a stir in the mind.  Checking in at the aptly-named First Gold Hotel Deadwood, my immediate intention is to walk back down into the heart of the National Historic Landmark District to savour some of the ambience.  The reconstructed capture of Wild Bill Hickok’s assassin Jack McCall by a group of performing actors is part and parcel of this contemporary experience.  A short time later, I’m happily partaking of a turkey melt and fries in the Stockade bar and restaurant.  A figurine of Wild Bill himself is purchased on my way back to the First Gold Hotel a little later.  The folk hero of the American West may be dead over a 140 years, but his spirit still resides here in the territory of Dakota.  But for me, it’s just one night here as I retire a short time later.  Tomorrow, I’ll be moving on and I hope you can join me for the next chapter of this particular snippet of personal history.