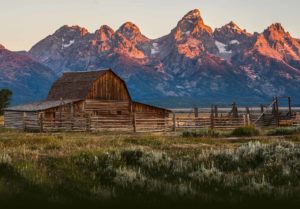 The air in Deadwood has been conducive to a good night’s sleep and I’m up at 4.20 in the morning for a much-needed shave and shower.  The disposable razors I’ve purchased since my arrival in the States are nicking my skin as they are wont to do; I’ve never seemed to manage the art of using these cheaper variety without several small cuts and minor mutilations, but the cold air outdoors helps with the healing process.  There are some stars in the early morning sky and I’m already questioning the sanity of wearing shorts.  The weather further down south in the likes of Utah and New Mexico should be much warmer than this.  My tour guide Adrian is already laughing at me when he sees me dressed like this in these early hours.  Perhaps he thinks us Irish are well-used to coping with this colder weather; perhaps it’s a heatwave by our standards.  But right now my priority is a decent breakfast to begin the day which I manage to procure at the earlier-than-expected time of 6 a.m.  The previous evening, Adrian seemed to think this would not be available until 7.  Thankfully, in Building 3 of the First Gold Hotel there is a complimentary breakfast served up from 6.  I guess the Irish guy in the unseasonable-looking shorts is not so silly after all.  In the dining area, I meet an English couple from the group who have also cottoned on to this early continental breakfast. 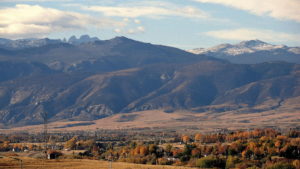 Our coach leaves pretty much on the dot of 8 a.m. as per usual and we re-enter the state of Wyoming on the half hour mark.  Myself and the other Irish guy on the tour have been hoping for a surprise detour to visit the National Monument that is Devils Tower in Crook County, Wyoming.  Best known to many from the 1977 Steven Spielberg film Close Encounters of the Third Kind, the laccolithic butte cannot be far away as it is signposted quite prominently at several exits along the course of our route from Deadwood to the town of Gillette.  But, alas, I never get to catch a glimpse of it in the distance.  Stephen later informs me that he could just about make it out thanks to an app on his phone.  I really ought to get up to speed with modern technology I conclude.  Or better still, I should make a point of returning here some day to see Devils Tower for myself.  The small city of Gillette in Campbell County is our first stop of the day at 9.35 and, once again, I find myself purchasing the seasonal pumpkin spice latte in a local Starbucks.  On the Western Discovery tour at this same time last year, I was struck by the Halloween decorations and pumpkins which were already on sale in the shops and supermarkets – Americans certainly appear to love the traditions of this particular time of year which includes trick or treat and jack-o’-lanterns.  In some stores entire aisles are devoted to the 31st October celebration.  Little wonder that the horror film industry continues to do good business at the box office.  This feels just as significant and as marketable as Christmas. 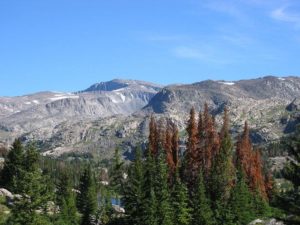 Our next stop is in the town of Sheridan at 11.30 and it’s high time for something a little more substantial than the aforementioned pumpkin spice latte.  And so I seek out a nearby Arbys for a well-deserved corned beef sandwich with curly fries.  I employ the term well-deserved here on account of my early morning rise and my continual pluckiness as regards the shorts – ok, granted that it’s not really cold now.  Departing Sheridan at 12.20 we traverse a section of the Bighorn Mountains on our way towards Cody, Wyoming.  A mountain range which extends from northern Wyoming to southern Montana, the Bighorns are a popular destination for hiking, backpacking and other such outdoor activities.  To my personal disappointment, however, we are nowhere close to the Little Bighorn Battlefield National Monument which marks the site of Custer’s Last Stand.  That’s located further north in the state of Montana as Adrian tells me.  Just like Devil’s Tower earlier, it’s simply not on the itinerary.  Well – I guess you can’t win them all; George Armstrong Custer certainly didn’t. 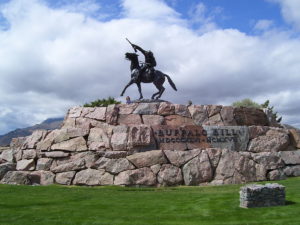 Emerging on the other side of the Bighorns after 3.30 in the afternoon, we pass through the town of Greybull in Big Horn County prior to reaching our destination for the day at 4.05 – Cody, Wyoming, which is named after the famous William Frederick Cody, better known to most as ‘Buffalo Bill.’  Cody was instrumental in the founding of this town and he also established the Irma Hotel here in 1902 which remains open for business as both a hotel and restaurant.  Renowned as a scout and bison hunter in the first instance, Cody, of course, gained his sizable reputation as a colourful character and showman by means of Buffalo Bill’s Wild West.  During an eighteen-month period spanning 1867 and 1868, he claimed to have killed 4,282 buffalo.  Hence the name and the legend which he was quite happy to actively promote far and wide. 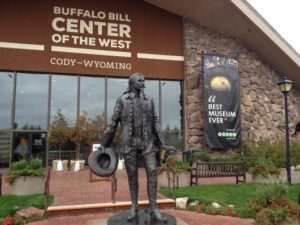 The Buffalo Bill Center of the West is an absolute must for anyone who has the remotest of interest in this historical figure and the old American West of which he was a part.  A number of hours could easily be passed here and – thankfully – we have almost two in which to get some of the flavour.  Of the five museums which are housed here, my personal favourites would have to be the Buffalo Bill Museum itself, the Plains Indians Museum and the Cody Firearms Museum – the latter of which contains some memorabilia employed in the film and television industry.  The Winchester Collection is a particular standout.  Keep a close eye out also for the DuBiel Arms Company rifles. 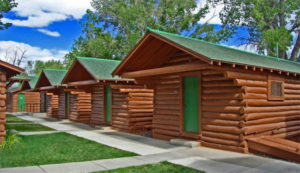 It’s entirely appropriate that we’re spending the night in wooden cabins in the Buffalo Bill Village.  Inside the cabin the bed sheets and pillowcases are suitably themed with depictions of Buffalo Bill’s Wild West shows.  There’s even a furry buffalo perched on one of the beds in the room.  Very cute and all part of the desired charm.  Walking down the main street of the town a short time later, I check out the aforementioned Irma Hotel and several of the souvenir shops.  A decision on food for the evening arrives when I meet Stephen and Marc on the street and we agree upon a few burgers and fries, washed down with some local beers.  Returning to the cabins after 10, we can’t help but remark upon the plethora of rabbits which sit around the Buffalo Bill Village quite contentedly.  4,282 buffalo in a period of just eighteen months I think before retiring; I wonder how many of these relatively sedate furry creatures the great man would be able to account for if he were still alive today.