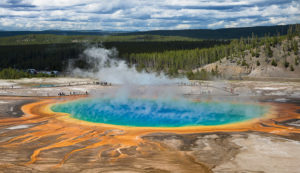 I’m up at 4.45 in the morning and the beginning of the day follows a familiar pattern for me.  After a shave and shower, I venture outdoors for a quick stretch of the legs, but it’s a chilly morning in West Yellowstone and it doesn’t take very much to convince myself to return indoors pronto.  Breakfast – which commences at 6 a.m. in the Brandin Iron Inn – is free of charge and I’m joined by a German friend from my group who tells me of a trip he’s done in the recent past in Florida with a member of his family.  We depart the hotel at the usual hour of 8, but the first part of our day today involves a return to Yellowstone Park and there’s no one on the coach arguing over the merits of this short journey back.  Reliable, as always, Adrian tells us that many of the hot springs and geysers in the park are even more spectacular in the chill of the morning and, besides all of that, there are far fewer tourists to compete with for vantage points.  Passing back into Yellowstone via the west entrance, we briefly spy some elk in the distance before making our first photo stop at 8.35 to take in some of the geysers and bubbling water.  The centrepiece of this sojourn involves a walk to view the Grand Prismatic Spring and Excelsior Geyser which are both located in the Midway Geyser Basin of the park.  The colours on view in this the largest hot spring in the United States are incredibly evocative to say the least and the fountain-type geyser which is the Excelsior is also quite a sight to behold. 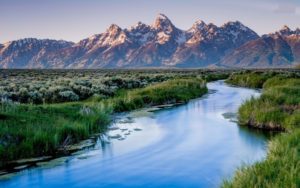 But, sadly, all good things must come to an end and it’s not long before we’re departing Yellowstone at 9.50 crossing over the Continental Divide twice (between 10.10 and 10.30 a.m.) on our way to Grand Teton National Park in northwest Wyoming.  In an official capacity, we leave the park via the south entrance at 10.55 and I imagine I’m not the only one on the coach who harbors aspirations to return here some day.  Our arrival into Grand Teton National Park comes at 11.05 and we make a photo stop at Jackson Lake at 11.10.  A break stop at Colter Bay at 11.30 is most welcome and I use the time to grab a much-needed coffee and bagel in a local store.  The Rocky Mountain Frontiers trip certainly involves much more food on the go than last year’s Western Discovery, but I remind myself that the itinerary promised lots of movement and it’s making good on that.  On a personal level, I don’t think I’ve ever availed of so much Starbucks coffee before.  Or bagels and large American-style sandwiches for that matter.  This particular national park – which was formally established in 1929 – is located just 10 miles south of Yellowstone (hence the short travel time) and is named for Grand Teton, the tallest mountain in the Teton Range.  Famously captured in the lens of one Ansel Adams, the range has also served as the setting for 1953’s Shane starring Alan Ladd and featuring a memorable Jack Palance performance.  Who can possibly forget that film’s famous finale as a distraught Brandon deWilde implores the hero to return after he has dispatched the baddies? 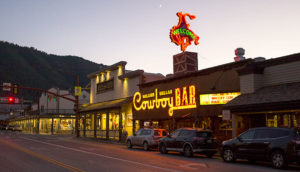 The nearby town of Jackson (which is locally called Jackson Hole), located in the valley of Teton County, provides us with our longest stop of the day and I use the time to seek out just enough food to tide me over until this evening’s optional excursion which also involves…well…food.  A bowl of corn chowder and a cold beer suffices for the moment and myself and a friend from the group also take in the famous Cowboy Bar which is situated in the town square.  There’s no beer consumed on our part here, but my friend is asked for id as we enter nonetheless.  I’m reminded of my time in San Francisco many moons ago as a student when I effectively drank underage in terms of Californian law; thank goodness for the fake id that particular summer, but I doubt very much it would pull the wool over anyone’s eyes in this day and age.  How times have changed!  How laws have become so much more strictly enforced! 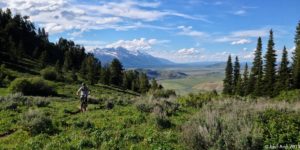 Checking in at The Virginian Lodge a short while after 3.30, I have just enough time to grab a quick shower and a supply of bottled water for the night.  The first of our optional excursions departs the hotel at 5.15 and we arrive at the Bar T 5 in a matter of minutes.  This evening’s adventure is intended to give us a taste of the Old West and there’s little amiss about the authenticity as we are transported to the glorious Cache Creek Canyon in horse-drawn covered wagons.  Privately, and joking to myself, I hope we don’t go the way of the infamous Donner Party which came to grief in Sierra Nevada in the 1840s. 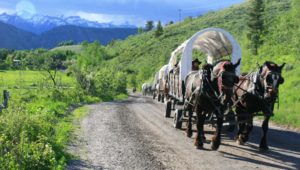 No such danger of that thankfully as we are treated to a top-notch Dutch oven dinner which comprises of chicken, roast beef, corn on the cob and other such culinary delights.  The live country-and-western show which follows isn’t quite my thing, but connoisseurs of this type of entertainment will derive great pleasure, particularly with regard to the interactive bits.  Members of my group will fondly recall the French expression ooh la la in this respect.  Let’s just say you had to be there and leave it at that.  It’s all over at 8 and darkness is already descending as our wrangler and team of horses (Lone Ranger) convey us safely back to the Bar T 5.  Returning to The Virginian Lodge at 9, I follow my now customary routine which involves an early night after a long day’s journey.  Is it me or the mileage or both I wonder as I turn in.  Much more to follow of course.  Tomorrow’s eventual destination is Salt Lake City in Utah which should prove to be quite a contrast to the Cowboy State that is Wyoming.