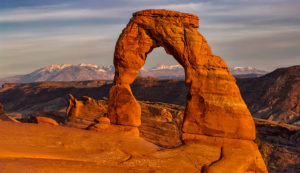 ‘Once you have travelled, the voyage never ends, but is played out over and over again in the quietest chambers.  The mind can never break off from the journey.’

My morning rise in Moab on Sunday the 9th September is at 5 a.m. and, following a shower, I venture outside for some air at 5,45.  The restaurant in the Moab Valley Inn opens at 6 a.m. and the continental breakfast on offer is complimentary.  The coach departs at the familiar hour of 8, but, unlike all other days on the Rocky Mountain Frontiers tour, we will be returning to the same hotel later on.  Adrian for his part promises that today’s trip will only take half of the day, so a 1 p.m. return or thereabouts is expected by most.  It’s also going to be one of the hottest we’ve experienced thus far.  The destination is Arches National Park.  Any of the photos I’ve seen of it so far are basked in strong and warm sunlight.  Definitely no need for a jacket in these parts. 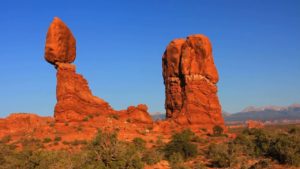 Our first photo stop of the morning is at 8.20 and it takes place at the beginning of the Park Avenue Trail as it’s known.  Located adjacent to the Colorado River and comprising some 76,679 acres, Arches was originally a national monument before it was redesignated a national park in November 1971.  There are more than 2,000 natural sandstone arches located in the park – hence the name.  At 8.50, our group arrives at the Balanced Rock – undoubtedly one of the park’s most iconic features.  The rock in question is the largest of its kind in Arches and its weight is said to be the equivalent of an icebreaker ship or 27 blue whales.  And – yes – sadly this rock will eventually collapse some day.  Not many things after all are impervious to the force of time and the elements.  So it’s great to appreciate this famous feature while it’s still here. 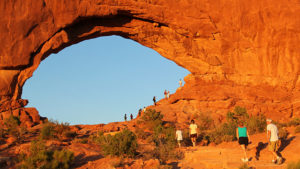 Our next stop is at Devil’s Garden at 9.30 and this involves a little walking in the rising heat.  One of my fellow travellers on the tour is an 89-year-old German by the name of Wolfgang and I can’t help but admire his energy and level of fitness.  The soaring temperatures seem to have little effect on him and no ascent is beyond his physical capabilities.  If I ever get to be Wolfgang’s age, I hope that I too can undertake a trip of this nature and intensity.  Respect indeed because the sun in eastern Utah is certainly bearing down on us today as we make our way to view the Landscape Arch – the longest of the natural rock arches in the park.  At 11.20, the coach conveys us to the point where we must begin our ascent to view the Delicate Arch – the park’s most famous landmark and one which is depicted on Utah licence plates.  The gradient isn’t incredibly difficult, but the heat is keenly felt.  Just as soon as I’m sure Wolfgang hasn’t braved this particular climb, there he is in front of me once again.  Nothing seems beyond him.  If anything, he puts some of the rest of us to shame. 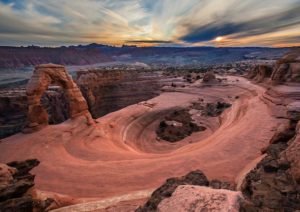 From our particular vantage point, the arch is quite a bit in the distance and does not seem as large as its 60-foot height suggests.  But it’s all a matter of perspective I guess.  Walking back down to the location of the coaches, I realise that this is the first day of the tour on which I have felt the heat as an unmistakable factor and presence.  Little wonder that we were brought out early in the morning before it peaked in the afternoon I figure.  Even Wolfgang might have struggled then. 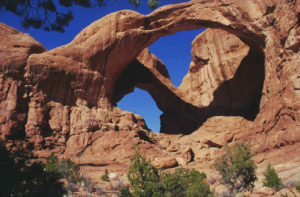 The Double Windows which comprise of the North Window and South Window serve as our next stop and we also visit the nearby Turret Arch.  By now, some of us are certainly noticing the effects of the heat which had been absent further up north during the early days of the tour.  It’s 1.30 when we eventually leave and the early risers among us have not eaten for about seven hours now.  A photo stop at the Colorado River on the way back to Moab at 2 p.m. is very pleasant, but the overriding feeling now is the want for some food and for some badly-needed sugar.  With those very sentiments in mind, I make a beeline for a nearby Burger King as soon as we return to the Moab Valley Inn.  I’m joined there by Marc who is of a like mind and, in unison, we scoff down a few burgers and soft drinks.  Fast food rarely tasted so good.  It’s more than a welcome respite after the heat and energy expended.  I wander back down the main street of Moab afterwards and treat myself to the book on the making of Thelma and Louise which I’d spotted the evening before.  A lucky horseshoe is also purchased – hey I did say that I hoped to do a tour like this when I’m Wolfgang’s age.  At 4.10, I return to the hotel and have a bath and shave.  The Men’s US Open Final between Novak Djokovic and Juan Martin del Potro is on TV so I watch this until it’s conclusion (Djokovic wins in straight sets).  Meeting Marc and Stephen at 7 p.m., the three of us agree on the Moab Grill for our place of dining this evening.  My own personal selection is a salmon melt sandwich and fries washed down with two Blue Moon beers.  Two more beers follow in a bar called Woody’s (not the character from Cheers) and the aforementioned Eddie McStiff’s where we are obliged to imbibe in a designated area in compliance with Utah regulations.  A leisurely stroll back to the hotel follows and my retiring time tonight is at the slightly later hour of 10.30.  I wonder if Wolfgang stayed out as late as this.  Given the considerable stamina he displayed earlier in the day, I would not be one bit surprised if he did.