The Blogger’s Word: The Exorcist II And The Point Of Horror Sequels 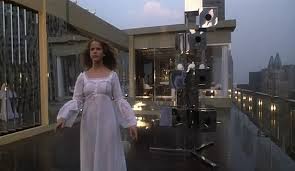 There’s a scene in Richard Donner’s 1988 film Scrooged in which Bill Murray’s character Frank Cross is mistaken by a group of homeless people for Richard Burton.  One of them in particular Herman (Michael J. Pollard) mentions Burton’s screen roles in The Night of the Iguana and Exorcist II: The Heretic.  Whatever about the 1964 adaptation of the play by Tennessee Williams, it’s highly unlikely that the venerable Welsh actor, who passed away in 1984, would have recalled Exorcist II as one of his more memorable films.  Released in June 1977 The Exorcist II was pretty much universally panned by film critics of the day, but it is important to point out that commercially it did not fare badly at all with an eventual box office haul of some 30.7 million dollars.  Many hold it up as one of the worst films ever made.  That’s not quite the case.  I watched it again recently and I’ve seen a lot worse.  Exorcist II may well be a very poor mainstream film indeed, there’s no arguments there.  Picking up four years later from the events of The Exorcist (1973) it utterly pales in comparison to that horror classic, but let’s also remind ourselves that, as so often in cinema, and the horror genre in particular, a sequel was always a given in light of the critical and commercial success of William Friedkin’s original. 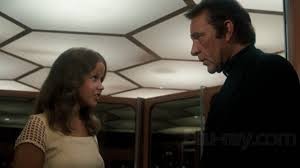 And so the premise of The Exorcist II goes like this: following an exorcism in South America which goes horribly wrong, Father Philip Lamont (Burton) is dispatched by his superiors to investigate the circumstances surrounding the death of Father Lankester Merrin (Max von Sydow) during the exorcism of Regan MacNeil (Linda Blair).  He finds Regan in the care of Dr. Gene Tuskin (then recent Oscar winner Louise Fletcher) and Sharon Spencer (Kitty Winn – one of three returning cast members from the original).  Tuskin is monitoring Regan at her psychiatric unit in New York City and she believes the young lady has repressed memories concerning her possession and the deaths which occurred in relation to it.  Pulling many varieties of careworn expressions in his performance, Burton’s priest has his doubts about Regan and wonders as to whether a residual evil still resides within her.  His misgivings seem to be somewhat confirmed during a hypnosis experiment in which Tuskin’s life is endangered by Pazuzu/Regan. 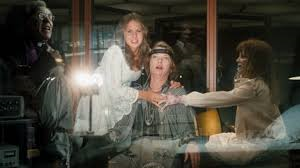 The sequence involving this deep hypnosis (or synchroniser as it’s referred to in the film) is quite visually muddled and that’s really symptomatic of The Exorcist II as a whole.  The story is muddled at best and it gets no better when Burton’s character travels to Africa in order to seek out Kokumo (James Earl Jones), a man whom Merrin had exorcised many years before.  Here – in this character – we are presented with the notion that there are innately gifted people, such as Kokumo and Regan (whom we have previously seen reaching an autistic girl), who draw upon themselves great evil from the Devil, from Pazuzu.  The Exorcist II’s denouement does nothing at all to save the film on the whole and. as I mentioned earlier, it was fairly derided by contemporary critics of the day.  William Peter Blatty (who wrote the novel on which the original film is based) asserted at the time that he was one of the first people to start laughing at it in a movie theatre.  ‘You’d think we were watching The Producers,’ he was quoted as saying in reference to the audience reaction.  But then, let’s remember that Blatty himself went on to make the third installment in the series, 1990’s The Exorcist III starring George C. Scott. 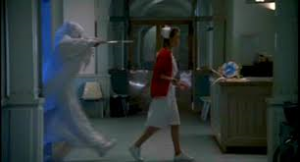 Film sequels are an inevitability it seems, just like death and taxes.  The mention of death here is especially relevant.  Horror sequels are indeed a given if, and when, the original premise performs well at the box office and scares the hell out of movie-goers in the process.  So, of course, Michael Myers is going to keep on rising from the dead in the Halloween series.  John Carpenter’s seminal original from 1978 set many precedents and tropes within the genre, but very conveniently it’s ending – He’s still alive!!!! – paved the way for a sequel in 1981.  And then a sequel that wasn’t really a sequel in the form of 1982’s Halloween III: Season of the Witch.  And then five more sequels before two remakes came along courtesy of Rob Zombie (that is the director’s name, I kid you not).

I’ve managed to sit through all those aforementioned sequels and remakes and, as is so often the case with sequels and film franchises, it’s a case of the law of diminishing returns.  The original Halloween remains the only one in the franchise directed by John Carpenter himself (although he did co-write and produce the 1981 sequel with Debra Hill) and it’s notable not just for its superiority to all the other films, but also for the visual flair and narrative restraint the highly-talented writer-director-composer brought to bear.  And there was very little in the way of bloodshed despite Michael’s knife-wielding exploits.  In the very best tradition of Alfred Hitchcock, Carpenter relied on the mounting tension to elicit audience reaction and the pay-off remains as fresh and innovative today as it did way back in 1978.  The Halloween sequels, naturally, went in the opposite direction in this respect.  The films which followed became bloodier and gorier as successive directors attempted to find even more gut-wrenching ways by which the man in the white mask could off his hapless victims.  But the horror genre was moving in this direction in any case.  It’s worth mentioning that by the time he made The Fog in 1980, Carpenter found himself re-shooting several scenes in order to make the film gorier. 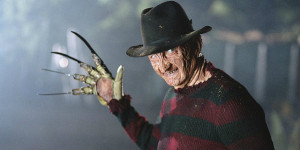 The Omen II (1978) and The Omen III: The Final Conflict (1981) also seemed preoccupied with finding even more blood-splattered deaths for those who dared to get in the way of Damien Thorn.  Following the famous decapitation scene in the original film, we then had a mad crow attack, a bizarre and quiet gruesome elevator death and a grisly suicide by the U.S. ambassador to Great Britain.  There wasn’t much in the way of thoughtful narrative trajectory here.  Damien Thorn – the son of the Devil – was going all the way to the White House and anyone not getting on side was sure to find himself or herself in great peril before long.  And as soon as the famous Jerry Goldsmith theme struck up, you knew for certain the writing was on the wall.  Very often the blood and guts as well.  But, like I said, as long as there was a possibility of money associated with this franchise, well then…  Finally, as to the character of Freddy Krueger above: the Nightmare on Elm Street franchise has spawned five sequels, a new nightmare, a Freddy vs. Jason spin-off and a remake in 2010.  Again, the law of diminishing returns applies here.  Well, not quite; I tell something of a lie.  The original Nightmare from 1984 is of course the best, but, unlike Halloween II, its direct sequel is quite possibly the worst of all the Freddy sequels.  The Dream Warriors (1987) actually wasn’t half-bad, but really after that again it’s just a case of watching the man in the hat (and I’m not referring to Indiana Jones here) perform his dexterous finger motions.  But here’s one final thought.  Of the four horror franchises I’ve mentioned in this article, only one has not yet had a remake.  It’s The Exorcist actually.  Yes, there was a prequel – actually two of them in 2004 and 2005 – but as of yet no remake has been broached to the best of my knowledge.  I’ve no doubt one will come along eventually.  After all, this is the horror genre.  They very much like their sequels and remakes.  So expect many more.