The Blogger’s Word: Why Do People Text And Phone At The Cinema? 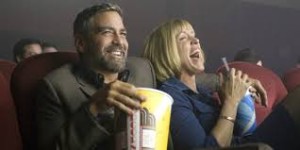 On Friday 5th August, 2016 I left the office early and walked around the corner to the Savoy Cinema on Dublin’s O’Connell Street.  I had a ticket booked for a 4p.m. showing of Pixar’s latest offering Finding Dory, the sequel to its much lauded and hugely successful 2003 Finding Nemo.  I was looking forward to it.  Most reviews and word-of-mouth were positive.  Albert Brooks and Ellen DeGeneres were returning respectively as Marlin and Dory.  Now I was under no illusions as I walked into Screen 3 of the Savoy at 4.05.  This was an animated movie after all.  And one of Disney’s marquee pictures for 2016.  Naturally, there would be children present.  Even some very young ones whose attention spans would be challenged by the 97-minute running time.  There would be some noise, more than usual, but I was resigned to this.  After all, if you have a problem with noise per se, why go to the cinema at all?  It’s part of the cinematic experience to witness, or hear, other people’s reactions which is what attending a good old-fashioned horror flick for example entails.  If I wanted a pure viewing experience, then I would remain home all the time and wait for the typically four-month window to elapse before purchasing the Blu-ray or DVD.  But what’s the use of that?  Or where’s the value?  And besides, I like to support cinema.  And I do like it when those lights go down and the trailers begin. 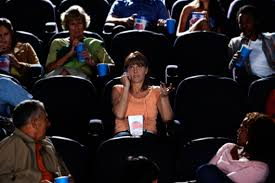 So I was not oblivious to the type of film I was attending, nor to the predominating age group that would likely be populating the darkened auditorium.  This was not a French avant-garde piece.  Nor was it part of a Kurosawa festival.  It was Disney dummy, or Disney-Pixar more properly.  There would be no monologues on the nature of existence.  Nor Samurai coming to the assistance of impoverished farmers.  The short film Piper which preceded Dory was an absolute gem, but, alas, there was some noise even at this early stage.  A mother in the very back row had two children, one of whom was no more than three years old and already becoming restless.  The woman was not helping this situation.  She kept shouting back at the child, telling her to shut up.  I’m no parent myself, but she didn’t strike me as a paragon example in this moment.  Perhaps she’s better with her kids in a domestic setting.  Evidence, however, suggested to the contrary.  I was resigned to the noise as Dory began and figured I would just have to grin (at the film of course) and put up with it.  The snappy sounds from the mother continued behind me though.  The child was not with the film at all and was trying to move around, as children will naturally do.  Again I had no great problems with this.  I just felt a bit sorry for the little girl.  Probably no more than a year older than my own nephew Eoghan, she was out of her depth (an intended pun since this was Finding Dory after all) at this particular film.  My nephew watches Peppa Pig and Fireman Sam.  He too would be restless at a 97-minute film.  It’s too much at this age.  Children do not have the requisite attention span when they are so young.  But then to my consternation I became aware that something else was going on.  The woman had made a phone call and was in the middle of making arrangements for later on.  She concluded her call quickly, but then 10 minutes later – just as the action onscreen was moving into the Marine Life Institute – she made another call and there was no sign of this one finishing anytime soon.  And so I did something I’m usually loath to do, but felt the need on this occasion.  I turned around and shushed her.  Very quickly her voice dropped and she soon wound up her chat.  In fairness to her she came down to my seat thereafter and apologised.  There were no more mobile calls thankfully.  The family of three as it happened left the cinema with 20 minutes still to go.  Something of a waste of money methinks.  She might have been better off spending it on Peppa Pig DVDs.  There are 249 episodes of that to date after all.  Lots of choice there. 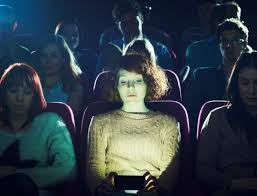 My point about taking very small children to feature-length films having been made above, I now want to ask the central question.  Why on earth do people go to movies and text incessantly or view social network accounts as I often see them do?  And why do they make and take calls during a film?  If they want to talk to their friends, why not go to the pub?  It’s surely a waste of money to purchase a cinema ticket and then spend the time texting Dave who’s home on the sofa watching the latest episode of The Big Bang Theory.  Or checking out Fiona’s holiday snaps from Barbados on Facebook.  But let’s drill down just a bit further and consider the sheer ignorance and discourtesy that’s displayed towards genuine cinema-goers such as myself who want to watch the film with the minimum of distractions.  I’m not completely pernickety in this respect I will emphasise.  I don’t mind the rustling of popcorn bags or the slurping of fizzy drinks.  But I do mind it when a phone lights up beside me and an individual descends into their social networking world.  And as for making and taking calls – outright ignorance as far as I’m concerned.  Get out of the cinema if you’re going to do that.  Leave the auditorium to some sort of peaceful decorum.  No one wants to hear what you’re doing Saturday evening or to whose barbeque you’re going.

The actor Ralph Fiennes took the completely right approach a number of years ago whilst performing Brian Friel’s play Faith Healer at Dublin’s Gate Theatre.  If you haven’t seen or read the play, then it’s quite important to understand that Faith Healer consists of four parts, each one composed of a monologue by the three characters.  Fiennes was playing the role of Francis Hardy, the faith healer of the title.  He was joined in the cast by Ingrid Craigie and Ian McDiarmid, of Star Wars fame.  Faith Healer is not your typical run-of-the-mill play.  There are just three characters and no interactions take place between them.  Hardy’s monologue is first, it’s then followed by his wife, Grace, and his manager, Teddy.  The play concludes with a fourth monologue which is delivered by Hardy again.  Just consider for a moment how difficult it must be to commit a lengthy monologue to memory and then the concentration required to deliver it verbatim on stage.  There must be pressure on the actor.  The smallest slip might throw him or her off balance.  A theatre has its intermittent noises as well – coughing, sneezing, breathing.  An audience can’t help that.  But the stage actor has to contend with that.  Particularly when he’s delivering a complex monologue.  He’s also depending on the good graces of what should be his or her captive audience.  They’ve paid the admission price so you would think this is a given.  But not always.  I’ve had a huge admiration for Ralph Fiennes ever since his emergence in the 1990s in such stellar dramas as Spielberg’s Schindler’s List and Redford’s Quiz Show.  He has an unmistakable onscreen presence and rarely hits a false note.  I’ve also heard he does a wonderful Hamlet on stage.  I was fortunate enough to see him in Faith Healer during its run at the Gate Theatre.  The play went on to Broadway where it received a number of Tony nominations.  But what I didn’t know the evening I saw the play in early 2006 was that there had been an incident at a previous performance.  Despite the regular appeal by management prior to the performance in question, a lady in the audience had not put her phone on silent.  A call came through during one of Fiennes’s two monologues.  Presuming she would go undetected, or else in sheer embarrassment, she allowed it to ring out.  The caller, however, was undeterred and not aware of her present location.  Again he or she rang the phone.  From his position on the stage Fiennes was able to tell who the owner of the interfering phone was.  Breaking out of character, as he had to do, and following one or two expletives, he told her to either answer the phone or switch it off.  You don’t need to be a genius to work out which option she subsequently chose.

So what can management of a cinema or theatre do in the face of social media, texting, tweeting, phone calls, the incessant need some people feel to keep up with the world during a brief two hours in the auditorium?  They can’t ban mobile phones outright because how could such a policy be possibly enforced?  And as for the message before a film begins regarding the turning off your phone.  I note with some curiosity that any film I’ve recently seen no longer seems to carry this prior message.  Have they simply given up on it?  They appear to have done so.  Truth be told it did seem to be having very little effect in any case.  I don’t have a solution to propose, nor do I have an explanation to offer as to why certain individuals attend a film or play and cannot possibly tear themselves away from their precious phones for a few hours.  Increasingly we have our heads stuck in our mobiles and smartphones in almost every conceivable situation – on the bus, in the street, even during conversations with friends in the pub.  I guess it’s just a sign of our age.  An emblematic practice derived from our technological progress.  But if you are one such person, please think twice the next time you book a cinema seat or a date at the theatre.  Consider those around you who actually want to watch the entertainment.  Don’t be surprised if you get shushed or receive a benevolent request to put the phone away.  That might be myself.  Or someone else who wants to see, and hear, how Dory gets found.  Or listen to an actor deliver an important soliloquy.  Either way, a bit of common courtesy please.  Ralph Fiennes won’t always be there to humiliate you into doing the right thing and turning off the blasted phone.