With the recent sad passing of the great Muhammad Ali, we consider the boxing movie genre and some of its finest examples down through the years.  In a recent blog on soccer movies, I suggested that the pugilist sport (as considered here) has offered up some very evocative character studies, as well as many cracking good yarns.  The boxer as a central character is perhaps the most interesting of all sports movie characters as he is very often a highly-conflicted individual who finds an almost zen-like solace inside the ring, as opposed to life in a much more real and harsh world.  Indeed, a good many of these films see individuals who lead far more turbulent, and even deadly, lives outside of the ring than they do within the realm of the boxing arena.  Mob control, unlawful puppet-masters, the lure of easy money, the shadow of heavy debts, spiralling domestic problems, and the pressures of a relentless media, are some of the common themes of the boxing movie, as well as the more straightforward physical matters of the combatant maintaining his shape and staying sharp for the next bout, the next shot, or challenge (as the case may be), for the title.  Below here are six for your consideration.  Seconds out.  Round one. 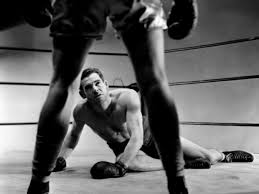 This film noir boxing drama from West Side Story and The Sound of Music helmer Robert Wise is quite unique in that it tells its story within the confines of a real-time narrative structure.  Bill ‘Stoker’ Thompson (Robert Ryan) is a fighter in his mid-thirties who’s seen better days.  Facing a last possible fight, and potentially a large purse if he throws it as his manager and a leading mobster hope, Stoker opts to do the right thing in the ring and battle as if his life depended on it.  The ensuing victory has physical consequences for himself – in the form of cronies dispatched by the vexed mobster – but Stoker holds the moral high ground at the end, having refused to dive for the easy money.  Based on a 1928 narrative poem of the same name by Joseph Moncure March, The Set-Up paints a less than flattering picture of the shady business deals and illicit characters who occupy its world.  The fight scenes are quite graphic for the period and the ringside ambiance is wonderfully realised in the small-time arena and its smoke-infused, sultry environment.  The fight scenes were choreographed by former welterweight Johnny Indrisano.  Robert Ryan himself had substantial experience in the ring having been heavyweight champion at Dartmouth College for four years in a row.  Director Wise rated this as one of the best of his career and it’s easy to see why.  A raw relentless classic. 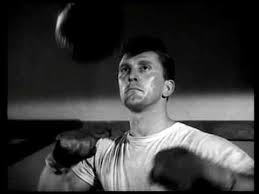 As with The Set-Up of the same year, Mark Robson’s Champion examines some of the more sordid aspects of the pugilist sport, including match-fixing and the declining moral compass of its main character.  The great Kirk Douglas plays Midge Kelly, a man who doesn’t have two cents to rub together for himself after a restaurant venture falls through, and enters into the ring game in the hope of finding fame and fortune.  The 99-minute film examines his rise to the top of the profession and the very private sacrifices and transgressions he makes along the way of getting there.  Arthur Kennedy features as his brother, one of the several bystanders in this regard; Ruth Roman and Marilyn Maxwell play the women in Kelly’s life.  Interestingly enough the producers of The Set-Up sued the filmmakers for alleged similarities between this one and their own production.  Based on a short story by Ring Lardner, Champion’s principal photography lasted a mere 20 days.  Clips from this film appear in 1999’s Diamonds in which Douglas plays a one-time welterweight champion attempting to reconnect with his son.  The lead actor picked up one of his several Best Actor nominations for the earlier film.  He’s never won a competitive Oscar and is one of the greatest actors never to have done so. 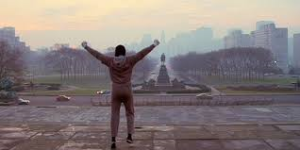 The most famous film about the sport of all-time?  In a word, probably.  Avildsen’s Oscar-winning film is the classic tale of the underdog who defies the odds, loses the bout, but wins so much more, and Rocky is also about the backstory of Sylvester Stallone himself who penned the script in a mere three-and-a-half days (so the legend goes) and convinced producers Robert Chartoff and Irwin Winkler to cast him in the lead role.  Now that was really against the odds stuff, and despite its slender budget and relatively low-key setting, there is little doubting how well Rocky works as a story of inspirations and sheer raw guts.  Stallone apparently began his script after watching Chuck Wepner take on Muhammad Ali in 1975.  The lesser-known boxer took Ali to the 15th round, much longer than anyone had expected, and this is much of the premise of Rocky’s clash with Apollo Creed in this one as well.  Other inspirations included better known names such as Rocky Marciano and Joe Frazier (who appears in the film playing himself).  Everyone of course recalls the now-famous sequence in which Rocky ascends the steps leading up to the Philadelphia Museum of Art, but my own personal favourite is the scene in which Rocky takes Adrian on an unconventional date to a deserted ice skating rink.  The scene was originally intended to take place during daytime and involve many extras, but budgetary constraints forced the filmmakers’ hands and they opted for a more economical approach.  It’s a standout moment with great performances from Stallone and Talia Shire and proves that sometimes in film-making the very best moments come about accidentally.  Six sequels have since followed, most recently 2015’s Creed which saw Stallone occupying the role of trainer/mentor to Apollo’s son. 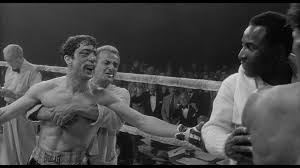 Another one from the production team of Chartoff and Winkler, this is an entirely different boxing picture in terms of tone, style and source material.  Robert De Niro (never better in Best Actor winning mode) portrays former middleweight champion Jake LaMotta, a fighter whose life was even more tumultuous outside the ring than in it; and whose six bouts with Sugar Ray Robinson between October 1942 and February 1951 remain legendary in the sport.  De Niro trained with LaMotta himself in preparation for Scorsese’s film and the intensity of the fight scenes has never really been surpassed onscreen.  In a further remarkable piece of physical transformation, having completed these scenes, the method actor lived for a number of months in Northern Italy and France where he gained the necessary 60 pounds for the later phase of his character’s life.  The subject of a lukewarm box-office take and initial critical reception, Raging Bull is now generally regarded as one of the greatest movies of all time and has regularly topped polls for the best film of the 1980s.  It’s a completely justified accolade because Scorsese and De Niro eventually found in LaMotta’s self-destructive tale innate human qualities and failings which are as affecting as they are undeniable.  De Niro’s performance is quite possibly the greatest of all time (in my estimation at least) and Scorsese’s direction is quite simply high art.  The result – the greatest sports biopic of them all. 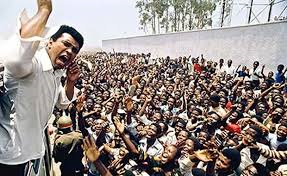 The famous ‘Rumble in the Jungle’, the championship match between Muhammad Ali and George Foreman in Kinshasa, Zaire, is the subject of this Oscar-winning documentary feature, surely one of the best sports documentaries of all time.  Ali travelled to the central African state a distinct underdog in the face of Foreman’s quite impervious reputation at the time, and sheer punching power.  During the fight itself he played the perfect rope-a-dope leading his opponent to expend too much energy in the early rounds before pouncing for an eight-round knockout.  The film isn’t so much about the fight itself of course, but about the build-up and hype surrounding the bout.  Ali is the central character in this naturally and the famous Louisville Lip more than lives up to his name with his trademark quips and digs at his much more sullen opponent.  Contributions are provided by some other illustrious names as well such as Norman Mailer, George Plimpton and Spike Lee.  Don King also features in one of his first big promotions and musical stars appearing at the soul festival accompanying the fight include James Brown and B.B. King.  The film goes beyond 1974 ever so slightly in that it examines the paths both men took following the match.  Ali’s subsequent health difficulties are touched upon, but also Foreman’s own state of mind following the shock defeat; he did not return to the ring until 1976.  Both men took to the stage at the 69th Academy Awards when the film won Best Documentary Feature.  It was certainly one of the most memorable moments in Oscar history. 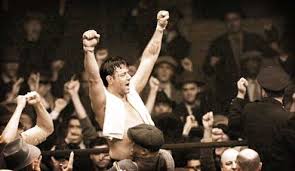 Ron Howard’s mid-noughties film concerns James J. Braddock – the so-called Cinderella Man, as celebrated author Damon Runyon dubbed him – an Irish-American boxer who seized a chance opportunity presented him in claiming the heavyweight championship of the world in 1935 against then holder Max Baer.  Russell Crowe is in fine form as the central character and he is ably supported by a cast which includes Renee Zellweger and Paul Giamatti as his manager Joe Gould.  Set in depression-era America, Cinderella Man is also about one man’s struggle to hold his family together and make ends meet following severe financial losses he incurs in the wake of the Wall Street Crash.  There’s a good period sense to the piece and Howard’s direction underscores the ambiance and setting of his story.  Braddock, incidentally, went on to defend his crown unsuccessfully against the great Joe Louis.  But his place in boxing, and American folklore, was already sealed by then.  The moniker of the Cinderella Man was indeed well earned.  This is a fine riches-to-rags and back to semi-riches story.